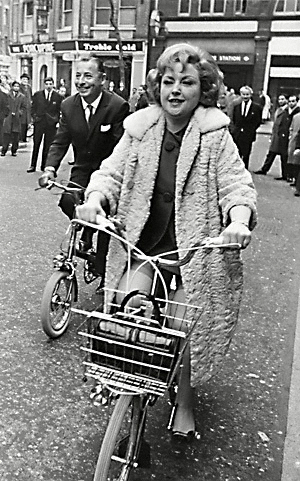 Turner, Joan Theresa (1922–2009), comic singer and impressionist, was born on 24 November 1922 at 2 Eglinton Street, Belfast, the daughter of Leonard Alfred Turner, a corporal in the British Army, and his wife, Helen Mary (Ellen), née Charlesson. At the time of her birth registration her parents lived at 16 Glenravel Street. The family moved to London, where her father drove buses and taxis, and she won a scholarship to the Sacred Heart Convent in Victoria, but left school at the age of fourteen to pursue a career in show business.

Turner's first professional appearances were in the choruses of musical comedies and revues. By 1937 she was working as a solo turn in variety and touring revues, billing herself initially as 'The Wacky Warbler' and later as 'The Girl with a Thousand Voices'. Although she would change her material, the basic format of her act remained the same for decades, a mixed bag of songs, jokes, and impressions, her subjects including stars of the day like Zasu Pitts, Suzette Tarri, and Gracie Fields, to whom she was often compared. Like Fields, she was a gifted singer who could easily move from laughter to sentiment, and her repertoire included operatic numbers that allowed her to show off her vocal virtuosity. A review in The Stage captured the appeal of her act: 'Her wit is sharp, her smile charming, her voice rings with fullness and expression, and she has a knack of parodying some of her own work, with excellent effect' (The Stage, 7 Feb 1952). She would belt out a powerful, high-pitched warble over the introduction to a song, then get a laugh by commenting 'Nobody sleeps when I'm on', in a down-to-earth Cockney accent; or primly announce 'I should like to start my programme this evening with a very well known song called 'Love is Where you Find it'', before growling a lascivious 'Cwooorrr!'

By the 1940s Turner was appearing in pantomime, playing Dandini in Cinderella and the title role in Aladdin, and by the early 1950s had started broadcasting on radio programmes such as Music Hall. In 1952 she successfully auditioned for the powerful agent Jack Payne by making an unannounced guest appearance in a Crazy Gang revue at the Victoria Palace. Her reputation continued to grow throughout the 1950s. In 1954 she appeared in the royal variety performance at the London Palladium, and towards the end of the decade she performed in a number of televised shows for the Lady Ratlings, this being just one example of her charity work.

Turner's career easily survived the death of the variety theatres, and the 1960s saw her performing her act in northern clubs, midnight floor shows in hotels, and the Talk of the Town nightclub in London. She also diversified, appearing in television plays as well as her own television series for Tyne Tees, and in straight roles in the theatre, notably starring in The Killing of Sister George at the Theatre Royal, Windsor, in 1967. She made a number of successful LP records, including The World of Joan Turner and Joan Turner's Workshop, and by 1968 had started to perform her one-woman show, initially called An Evening with Joan Turner and later Joan Turner Unlimited, with which she continued to tour throughout much of the 1970s.

In spite of the success of her live work and appearances on television shows such as London Weekend Television's Who Do You Do, Turner's personal life started to undermine her career. She had longstanding problems with drinking and gambling, joining Alcoholics Anonymous to try to cope with the former problem while the latter led to her declaring bankruptcy in 1977. In the same year her drunkenness led to her being sacked from a major West End production of Oliver. She was twice married: first on 7 September 1946 to (William Hugh) Christopher Page (1911–1994), solicitor, and son of Hugh Noel Page, Bank of England official, and secondly on 27 June 1963 to Leslie Edward Cocks (formerly Cock) (b. 1927), record company executive, and son of Charles William Cock, school caretaker. Both marriages ended in divorce.

Turner continued to experience a mixture of success and increasingly hazardous alcohol-induced episodes for the rest of her life. She was still capable of coming over well in live performances, such as an engagement at the Tramshed in 1980, and on television, notably a celebrated appearance on The Michael Barrymore Show in 1995. On the other hand, in 1991 she was sacked from the cast of the soap opera Brookside after just a few episodes. In 1996 she went to America for an unsuccessful audition, stayed on illegally, and in 2001 was found destitute, living in a homeless mission in Los Angeles. She was brought back to the UK to live in sheltered accommodation in Surrey, but was still prone to drunken incidents, such as a disastrous tribute lunch at the Club for Acts and Actors in 2003, and a shambolic, expletive-studded cabaret performance at the Jermyn Street Theatre in 2005. She died of respiratory failure and chronic pulmonary disease at St Helier Hospital in Carshalton on 1 March 2009, and was survived by her three daughters.