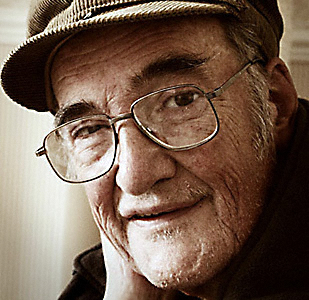 McGrath, Thomas Philip [Tom] (1940–2009), playwright, poet, and arts promoter, was born on 23 October 1940 at 16 Parkhill Drive, Rutherglen, then an independently minded burgh on the outskirts of Glasgow, the only son of Thomas Edward McGrath, electrician, and his wife, Annina, née Di Giacomo. He had two elder sisters, Rita and Marie, and took pride in his mixed Italo-Scottish heritage. Brought up a Roman Catholic, he attended St Columbkille's Primary School, Rutherglen, and St Mungo's Academy, Dennistoun.

On leaving school McGrath worked in a variety of jobs and studied at Glasgow College of Commerce. Nonetheless, influenced by older fellow Scottish beat generation luminaries, R. D. Laing and Alexander Trocchi, whose friendship he was to seek, his main interest was the arts. He developed as a jazz musician and in 1962 his first poems were published. He married Marie Anne (Maureen) Herron, a student at Glasgow School of Art, and daughter of Connell Herron, photographer, on 3 June 1963. They moved to London that September, their first daughter being born in November. Three more daughters would follow.

A Campaign for Nuclear Disarmament supporter, McGrath was from 1964 to 1966 features editor of Peace News, the pacifist newspaper. Continuing writing poetry and playing music, he participated in the 1965 First International Poetry Incarnation at the Royal Albert Hall, accepted into the distinguished radical company of Allen Ginsburg, Adrian Mitchell, and Michael Horovitz. John Hopkins, Jim Haynes, and Barry Miles invited him to edit International Times (IT), a fortnightly counter-cultural paper, launched in October 1966. He later said, 'I was actually living with a nuclear family in Bermondsey. The contrast was ridiculous' (The Independent, 27 July 2009).

He edited the first twelve editions with 'the fervour of a revolutionary movement and the mystique of Zen' (The Guardian, 1 May 2009), but, having experimented with drugs, he was now addicted to heroin, so hastening his departure from IT. His London stay, according to Michael Horovitz, 'encompassed a gradual demystification regarding the “kind of tyranny about … the gurus of the Underground”' (The Independent, 27 July 2009); in 1968 he returned to Scotland. There, kicking his habit, he studied English and drama at Glasgow University, where he met fellow poets including Tom Leonard and Alan Spence, later saying of this time, 'We were coming up with this street level sound of existentialist man in the street, “black man in the ghetto” type of writing. I just upset the applecart' (Brown, 26).

McGrath animated many major cultural events in Scotland thereafter. His reputation as a pianist marked by the 'effervescent freedoms conjured up by Charlie Parker, Thelonius Monk, Bud Powell and their ilk' grew (The Independent, 27 July 2009). He became musical director of Tom Buchan and Billy Connolly's The Great Northern Welly Boot Show (1972), satirizing and celebrating the Upper Clyde Shipbuilders work-in of 1971–2. Premièred at Clyde Fair International, this transferred to the Edinburgh festival fringe, its mixture of comedy, drama, and music a hit. This influenced later work by John McGrath (to whom he was not related), especially The Cheviot, the Stag, and the Black Black Oil (1973), whose cast included several Welly Boot veterans.

In 1973 the Scottish Arts Council appointed McGrath founding director of a multi-arts experimental venue in Glasgow's run-down, but still imposing, Blythswood Square, modelled on one in its grand Edinburgh headquarters. He swiftly moved the Third Eye Centre, named through his interest in Buddhism, a block away to demotic Sauchiehall Street, one of the most popular thoroughfares in the city, where it became a lively focus for interdisciplinary artistic enterprise. Although it closed in the early 1990s its place was soon taken by the Centre for Contemporary Arts, which opened in 1992. Meanwhile he brought to Glasgow giants of jazz such as Duke Ellington, Miles Davis, and Stan Getz. A dynamic arts promoter, he re-opened postwar Glasgow and Scotland to international perspectives.

Laurel and Hardy (1976), premièred at the Traverse Theatre, launched McGrath's play writing career, touchingly showing the dynamic of two great clowns' relationship. The next year The Hardman, co-authored with Jimmy Boyle, explored Boyle's early street violence and recidivist incarceration in a savage Scottish prison system. Despite its apparently despairing end in an impasse as the 'Hardman', caged in a special cell, smears himself with excrement in a nihilist ‘dirty protest’, the fact of the play implied Boyle's ultimate self-discovery as an artist in Barlinnie Prison's Special Unit, whose reforming arts work McGrath supported. Thereafter poetry, music, and plays flowed. Animal was an Edinburgh festival hit in 1979. The Innocent (1979), first performed by the Royal Shakespeare Company at the Warehouse Theatre, London, partly autobiographical, was entitled after Laing's dismissive jibe at McGrath when he resisted Laing's 'alternative' autocracy.

When in 1985 the Scottish Arts Council stopped funding the Scottish Society of Playwrights' highly successful play development programmes part of that money funded a new post, associate literary director (Scotland), charged with supporting young playwrights. McGrath was an ideal choice for this role, supporting leading younger playwrights such as David Greig, David Harrower, and Douglas Maxwell, while, throughout the 1980s and 1990s, he also wrote, mainly for the stage, but also for television. By 2001 everyone, including McGrath, felt the need to revisit the support of new play writing. After an initiative of Nikki Axford of the Scottish Arts Council discussions between the Traverse, the Scottish Society of Playwrights, and McGrath led to Playwrights Studio Scotland in 2004, with McGrath as director emeritus, partly drawing on funds that had supported his post. Despite a stroke in 2003 he worked on, producing his last play, My Old Man, in 2005.

Joyce McMillan called McGrath 'a confirmed abstract experimentalist in theatre, as in every other art-form' (The Scotsman, 5 May 2009). He was, as his life's work suggests, 'genial, generous and quick to laugh' (The Guardian, 1 May 2009). Having returned to his childhood faith, he died of liver cancer at his home, Ash Villa, Station Road, Kingskettle, Fife, on 29 April 2009. The funeral service was held in St Columba's Roman Catholic Church, Cupar, on 8 May, and he was buried in Kingskettle cemetery, overlooked by the Lomond Hills, amid the fertile farmland of Fife where he had settled. He was survived by his partner of twenty years, Ella Wildridge, and three of his four daughters.