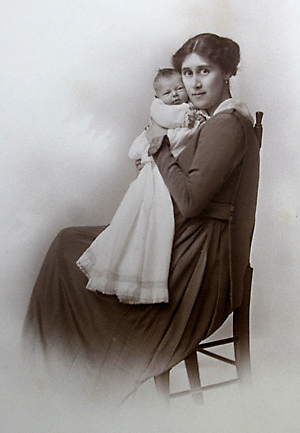 by kind permission of Anne Tickell and Martin Tomlins

Bebb [married name Thomson], Gwyneth Marjory (1889–1921), campaigner for women's admission to the legal profession, was born at Brasenose House, High Street, Oxford, on 27 October 1889, the second daughter and third of the seven children of Llewellyn John Montfort Bebb DD (1862–1915), fellow, tutor, and later vice-principal of Brasenose College, and his wife, Louisa Marion (1858/9–1939), daughter of J. R. Traer FRCS. In 1898 Llewellyn Bebb, who was of Welsh descent though born in Cape Town, was appointed principal of St David's College, Lampeter, and he became a prominent figure in the Welsh church. The family moved to Lampeter a year or two later.

Gwyneth Bebb was educated at St Mary Magdalene College for Ladies in Paddington, London, before going in 1908 to St Hugh's College, Oxford, where she read jurisprudence. In a college where most of her fellow students were aiming for careers as teachers or missionaries, her choice of jurisprudence was both unusual—only six other women had studied law at Oxford before her, among them Cornelia Sorabji and Ivy Williams—and risky, for women were at that time barred from the legal profession. Yet the possession of a law degree or its equivalent—degrees were not awarded to women at Oxford until 1920, although they took the same examinations as the men—would hardly have fitted her for any other occupation. It seems clear that Bebb, like her predecessors, embarked on legal studies in the hope that the legal profession would soon admit women; almost all other professions had already done so, and women had been campaigning for entry to law since the 1870s. Feminist enthusiasm ran high in the Oxford women's colleges—a contingent from St Hugh's marched in the Women's Social and Political Union's processions of 1908 and 1910—and the students' political and debating societies provided excellent training for future campaigners, barristers, and politicians.

In 1911 Bebb passed her law finals at Oxford with first-class honours, the first woman at Oxford to do so. She took up a post as investigating officer for the Board of Trade, where she was able to use her legal training to prosecute employers in women's sweated trades. But she did not give up her dream of becoming a lawyer and, following the failure of professional reform and a private member's bill in parliament, in January 1913 she and three other women simultaneously commenced separate actions against the Law Society seeking a declaration that each was entitled to be admitted to the Law Society's preliminary examination.

Bebb's action was taken as the test, and she gave her name to the celebrated case Bebb v. The Law Society (1914). On 1 July 1913 Stanley Buckmaster KC argued before a hostile judge, Sir Matthew Joyce, that Bebb was eligible to become a solicitor by virtue of section 48 of the Solicitors' Acts 1843, which stated that 'every Word importing the Masculine Gender only shall extend and be applied to a Female as well as a Male'. The judge dismissed the action, finding that women were incapable of carrying out a public function in common law, a disability that must remain ‘unless and until’ the legislature saw fit to remedy it; in other words, that women could not be solicitors because no woman had ever been a solicitor (the ‘doctrine of precedent’). This decision was upheld in the Court of Appeal in December of the same year.

The campaign to open the legal profession to women continued throughout the First World War, with attempts at internal reform, bills in parliament, and a good deal of publicity, much of it generated by Gwyneth Bebb and her fellow campaigners, and generally favourably received. Meanwhile, in March 1917, she became commissioner for the west midland division of the newly formed National Service for Women. On 26 April 1917, at St Mary Abbot's Church in Kensington, London, she married a solicitor, Thomas Weldon Thomson (1872/3–1930), of Sherford House, Tewkesbury, second son of Captain William Thomson of the Seaforth Highlanders. In August of the same year she was appointed assistant commissioner for enforcement for the Ministry of Food, midland division. For this work, which also involved prosecuting offenders, she was appointed OBE in 1921.

On 22 December 1919 Gwyneth Thomson gave birth to a daughter, Diana. Two days later the Sex Disqualification (Removal) Act 1919 was passed, finally lifting the bar to women's admission to law. Thomson, notwithstanding her earlier attempt to become a solicitor, applied to Lincoln's Inn with a view to becoming a barrister. At the banquet held at the House of Commons on 8 March 1920 to celebrate women's admission to the legal profession, attended by all the senior men of law, Thomson proposed the toast to the bar. In August 1920 she gave up her work at the Ministry of Food in order to study for the bar and help her husband in his practice at Tewkesbury.

On 10 August 1921 a second daughter, Marion, was born. The birth was traumatic: Thomson had placenta praevia, a condition in which the placenta blocks the entrance to the uterus, leaving the mother at risk of haemorrhage unless an emergency caesarean is performed. The baby, premature, died two days later; the mother, after suffering a post-partum haemorrhage, anaemia, pelvic thrombosis, and cardiac arrest, died at Kingsthorpe Nursing Home, 42 Wheeleys Road, Edgbaston, Birmingham, on 9 October 1921. Her funeral took place at Tewkesbury Abbey. Her husband never remarried, and died eight years later in a hunting accident, leaving their daughter to be raised by a cousin.

Although she had been widely expected to become the first woman to be called to the bar, Gwyneth Thomson died before completing her studies and that honour went to Ivy Williams. Yet she deserves to be remembered not simply for the case that bears her name but for the central role she played in a long and carefully strategized feminist campaign.

The other three women who along with Bebb challenged their exclusion from the profession of solicitors went on to notable careers. Costelloe, Karin Elizabeth Conn (1889–1953), psychiatrist, was born in Westminster, London, on 10 March 1889, the younger daughter of (Benjamin) Francis Conn Costelloe (1855–1899), solicitor, and his wife, Mary Pearsall Smith. She and her sister, the feminist Ray Strachey, were brought up by their grandmother, Hannah Whitall Smith. After schooling at Kensington high school and Roedean School, she read for the moral sciences tripos at Newnham College, Cambridge, and took firsts in parts 1 and 2 in 1910 and 1911. She was a research fellow at Newnham in 1913–14, and on 21 October 1914 married the psychoanalyst Adrian Leslie Stephen (1883–1948), fourth child of Leslie Stephen, and brother of Virginia Woolf and Vanessa Bell. After studying medicine at University College Hospital, London, she qualified in 1924 and specialized in mental health. She was a member of the British Psychoanalytical Society. She was found dead at her home at Upper Harley Street, London, on 12 December 1953, having taken an overdose of barbiturates. A verdict of suicide was recorded at a coroner's inquest. Two of her daughters went on to study at Newnham; the elder, Ann Stephen, herself a medical doctor, married the biochemist Richard Synge.

Ingram, Maud Isabel (1889–1965), solicitor, was born at Brighton, Sussex, on 16 June 1889, the daughter of Thomas Lewis Ingram (d. 1921), barrister, and his wife, Violet Helen Georgina, née Skinner (d. 1938). After attending Hamilton House, Tunbridge Wells, she entered Girton College, Cambridge, where she took a second in history (1911) and a third in law (1912). After spending the war years working in a solicitor's office and promoting women's entry to the legal profession, she became the first woman to be articled to a solicitor, Trower, Still and Keeling, in December 1919, and the first to obtain a certificate to practise (1923). On 7 June 1922 she married a fellow solicitor, John Cecil Crofts (1892–1960), son of John Crofts, mechanical engineer. They had one son and one daughter, and settled at Barham Road, Wimbledon. She became a partner in the Westminster firm of Crofts, Ingram and Wyatt & Co., and was a well-known adviser on women's legal issues, including to the feminist Six Point Group. She wrote Women under English Law (1925), a survey of women's legal status as citizens, wives, mothers, and workers, published by the National Council of Women, of which she was an executive member, with an introduction by Millicent Fawcett. Her son was killed in action in 1944; her daughter studied at Girton. She died at 33 Buckingham Palace Mansions, London, on 18 January 1965.

Nettlefold, Lucy Frances (1891–1966), company director and local government politician, was born in London on 15 June 1891, the daughter of Oswald Nettlefold (1865–1924), wholesale hardware merchant, and his wife, Emily Josephine, née Buckingham (1863–1941). She was educated at Leinster House, Bayswater, and Newnham College, Cambridge, where she became the first woman to be awarded firsts in both parts of the Cambridge law tripos (1912, 1914). She was unofficially articled to a Lincoln's Inn solicitor before joining Bebb in National Service for Women and then the Ministry of Food (1916–19). She was an active member of the British Federation of University Women, and was a director of the federation's London residence, Crosby Hall. After the First World War she abandoned law to become, in 1919, a director and company secretary of her father's wholesale ironmongers and manufacturing business, Nettlefold & Sons. After her father's death in 1924 she became joint managing director with her brother until 1945. Retirement from the family business brought a second career in public service. In 1944 she was appointed a member of the royal commission on equal pay, which reported in November 1946, when she, along with Anne Loughlin and Janet Vaughan, signed a minority report in favour of a general adoption of equal pay. In 1946 she was appointed OBE. She entered local politics as a Conservative member of London county council, to which she was elected in 1949, and sat until 1960; she was also a member of Marylebone borough council from 1953. She went to live in South Africa, at Newlands House, Newlands, Cape Province, with her sister Joyce Newton Thompson (1893–1978), a pre-war student at the London School of Economics and suffragette, who became first woman mayor of Cape Town. The anti-apartheid politician Helen Suzman described how Nettlefold's 'strong feelings for women's freedom' were extended to the fight against racial discrimination in South Africa: 'She was incensed by the lack of opportunities for non-Whites, and she did everything in her power to encourage those who were fighting for the removal of disabilities based on race and colour' (Newnham College Roll Letter, 1967). Nancy Nettlefold died in Cape Town on 30 March 1966.