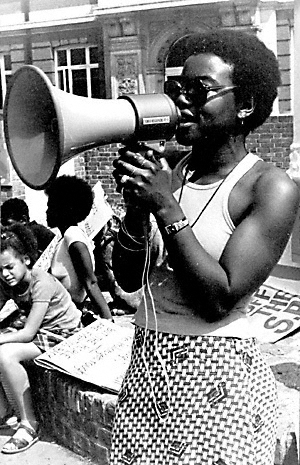 Morris, Olive Elaine (1952–1979), political activist, was born on 26 June 1952 in Harewood, St Catherine's, Jamaica, the daughter of Vincent Nathaniel Morris and his wife, Doris, née Moseley. When she was nine years old, she and her brother, Basil, left their maternal grandmother and joined her mother and father in Lavender Hill, south London. There were four further siblings. Olive's father became a forklift operator and her mother was a factory shop steward. Olive attended Heathbrook primary school and then Lavender Hill Girls' Secondary School and Tulse Hill secondary school. She left school without any qualifications and later went on to study at the London College of Printing.

The late 1960s and 1970s were a particularly challenging time for Britain's post-war African, African-Caribbean, and Asian communities: there was increased tension between police and the black community (epitomized by the ‘sus’ laws, that is, the laws allowing police officers to stop and search people on mere suspicion that they intended to commit a crime), and attacks by fascist groups such as the National Front, as well as discrimination in housing and employment. Olive Morris became a tireless organizer and fighter against racism, and also sexism and other forms of oppression. In an early example of her political activism she intervened in the arrest of a Nigerian diplomat for a parking offence in Brixton in 1969. She was physically assaulted and racially abused by the police and arrested, along with six other people, fined £10, and given a three-month suspended sentence for two years. The charges comprised assault on the police, threatening behaviour, and possession of dangerous weapons.

In the early 1970s Morris became a member of the youth section of the Black Panther movement (later the Black Workers movement), along with others such as Linton Kwesi Johnson, Clovis Reid, and Farrukh Dhondy. She was also a founding member of the Brixton Black Women's Group. Many black political organizations were based in and around Brixton, which was an important area for counter-culture political activity. She visited Germany in 1971. In August 1972 she and a friend, Liz Obi, planned to visit the American Black Panther leader, Eldridge Cleaver, who was in exile in Algeria, but they became stranded in Morocco. She squatted at 121 Railton Road, Brixton, with Obi in 1973. The squat became an organizing centre for community groups such as Black People against State Harassment as well as housing Sabarr Bookshop, which was one of the first black community bookshops. 121 Railton Road remained a social centre and a centre for the squatting movement until it was closed in 1999.

In July 1974 Morris returned to Jamaica for six weeks. The following year she began a degree in economics and social science at Manchester University. She was a member of the National Co-ordinating Committee of Overseas Students, which campaigned for the abolition of fees for overseas students; off-campus, she was involved in the work of the Manchester Black Women's Co-operative and the Black Women's Mutual Aid Group. She visited Italy and Northern Ireland in 1976. In 1977 she visited China and wrote a piece entitled 'A sister's visit to China' which explored the role of China in anti-imperialist struggles. It was published in Speak Out!, the Brixton Black Women's Group newsletter. In 1978 she, along with Stella Dadzie and other women, founded the Organization of Women of African and Asian Descent (OWAAD). OWAAD held its first conference at the Abeng centre on Gresham Road in Brixton, a centre that Morris had helped to establish along with Elaine Holness and other members of the community. Morris graduated in 1978 and returned to Brixton, working in the juvenile department of the Brixton Community Law Centre where she was involved in the campaign to scrap the ‘sus’ laws. She lived at 2 Talma Road, Brixton. She was also a burgeoning writer and co-wrote a piece on the Anti-Nazi League with her partner, Mike McColgan. 'Has the Anti-Nazi League got it right on racism?' was published in a flyer for the Brixton Ad-Hoc Committee against Police Repression in 1978 and criticized the strategy of focusing on fighting fascism, while largely ignoring the impact of institutionalized racism: the role of the police, the education system, and so on.

Morris became ill during a trip to Spain in 1978. On her return to London, she was diagnosed with non-Hodgkin's lymphoma and underwent treatment which was unsuccessful. She died on 12 July 1979 at St Thomas's Hospital, Lambeth, and was buried in Streatham Vale cemetery. She was survived by her partner, Mike McColgan. Her premature death was a shock to her friends, family, and political colleagues. A Lambeth council building, 18 Brixton Hill, was named after her in March 1986. A community garden and play area was also named after her in the Myatt's Fields area. In Brixton the Remembering Olive Collective was a community project established in 2008 to publicize her legacy and contribution to political struggle. In 2009 she was chosen by popular vote as one of the historical figures to feature on a local currency, the Brixton pound. In 2011 the Olive Morris memorial award was launched to give bursaries to young black women.