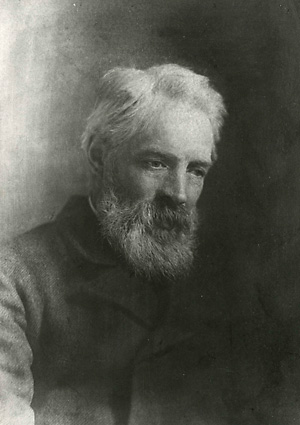 by permission of Strathclyde University Archives

Blyth, James (1839–1906), electrical engineer and university teacher, was born on 4 April 1839 at Marykirk in Kincardineshire, near Montrose (Forfarshire), the son of John Blyth (1793/4–1874), an innkeeper and small farmer, and his wife, Catherine (1802/3–1884), daughter of John Grant, militia officer; his parents were both originally from Rayne, Aberdeenshire. James was educated at Marykirk village school and Montrose Academy, before winning a scholarship to the General Assembly Normal School, Edinburgh, in 1856. Two years later he moved to England to take up a teaching post in mathematics and classics at Claverton Lodge near Bath, but in 1859 he returned to Scotland and entered Edinburgh University, graduating BA in 1861. In the following year, and while taking advanced courses in mathematics and natural philosophy, he was appointed to teach maths at Morison's Academy, Crieff, Perthshire, and in 1870 was invited to participate in establishing classes at the new George Watson's College in Edinburgh. On 28 July 1871 at the United Presbyterian Church, Atholl Place, Edinburgh, Blyth married Jessie Wilhelmina (1842–1923), daughter of William Taylor, an Edinburgh minister. The couple lived first at 8 Middleby Street, Newington, Edinburgh, and had seven children—two sons and five daughters—of whom two died in infancy.

During the 1880s Blyth combined teaching at George Watson's College with lecture tours in continental Europe and the further study of mathematics and German in Berlin. In 1880 he was appointed professor of natural philosophy at Anderson's College, Glasgow (from 1886 the Glasgow and West of Scotland Technical College), where he taught for the rest of his life. As well as teaching, he maintained an active research programme and was particularly interested in the generation and storage of electricity from wind power. Blyth would have been familiar with Sir William Thomson's studies of electricity at Glasgow University, both men being members of the Philosophical Society of Glasgow. In 1881 Thomson responded to recent work in France on accumulators (the forerunners of modern rechargeable batteries) with a lecture on the potential of wind as a means of generating electricity for storage. Thomson considered that the charging of an accumulator might 'be done uninjuriously, and with good dynamical economy' from this source, though he also maintained that 'windmills as hitherto made are very costly machines' and questioned whether, 'without inventions not yet made', 'wind can be economically used to give light in any considerable class of cases' (Price, 194).

Blyth began experimenting with windmill construction about 1885 and in late July 1887 he constructed a 'small windmill for supplying electric light by means of storage cells' in the garden of his holiday cottage at Marykirk. His paper delivered to the Philosophical Society of Glasgow on 2 May 1888 described the windmill as being of a tripod design, with a 33 foot windshaft, four arms of 13 feet with canvas sails, and a Burgin dynamo driven from the flywheel using a rope. Blyth noted how a 'workable speed is attained even when the windmill moves at a comparatively slow speed' (Price, 195). Blyth's windmill is the world's first-known structure by which electricity was generated from wind power. It predates the work of an American engineer, Charles Brush, who is credited with building the first automatically operated wind turbine in Cleveland, Ohio, several months later. The two turbines differed in that Blyth's lacked a control mechanism to allow for braking—and thus was in danger of being damaged in strong winds—whereas Brush's automatic turbine could be manually shut down. The success of Blyth's first windmill led him to patent his ‘wind engine’ on 10 November 1891 (no. 19401). On 25 January 1892 Blyth read a paper to the Royal Society of Edinburgh, 'On the application of wind power to the production of electric current'—awarded the society's Makdougall Brisbane medal for that year—in which he returned to Thomson's 1881 statement on the potential of wind turbines, emphasized his belief in the benefits of renewable energy (principally wind but also wave), and expressed doubts over the value of fossil-fuelled engines, though his concerns were scientific and economic rather than environmental. Blyth further speculated on, and later investigated, the potential for wind turbines as a source of power for industrial plants and lighthouses.

Blyth's paper also addressed improvements to his original windmill and on 13 May 1895 he licensed the Glasgow engineering firm Mavor and Coulson to construct a modified turbine in the grounds of the Montrose asylum. Blyth's new design replaced the vertical canvas sails with eight semi-cylindrical boxes (measuring 10 feet by 6) that caught the wind and, by rotating in a horizontal plane, turned a vertical axis that drove a 6 foot flywheel. This new design was modelled on Thomas Robinson's anemometer (invented in 1846), which Blyth believed would moderate his turbine's velocity and so prevent it from gaining excessive speeds. In tests Blyth observed that, even in a gale, his new design reached a 'terminal speed' with 'all racing avoided', though it appears that the turbine could not be guaranteed to stall in very strong winds. This said, its durability can be judged by the fact that it ran for twenty-seven years, generating 10 hp to storage cells capable of lighting the asylum.

In addition to his work on wind power Blyth studied the relative efficiency of lighting, arguing against the contemporary use of incandescent materials and in favour of a form similar to modern low-energy discharge lamps. Throughout his career he also maintained an interest in telephone communication and the microphone, and contributed entries on (among other topics) the gyroscope for the ninth edition of the Encyclopaedia Britannica. In 1900 he received an honorary doctorate from Glasgow University.

James Blyth died from apoplexy on 15 May 1906 at his home, 170 Great Western Road, Glasgow. He was buried in the family plot at Marykirk, Kincardineshire, and was survived by his wife, who died on 7 April 1923. To his obituarist Blyth's firm belief in 'harnessing the winds' made him 'a pioneer in this department of practical engineering' (Colville, 246). A year after his death he was commemorated with a memorial plaque at the college and there is now a portrait plaque in the Royal College Building, University of Strathclyde (as Glasgow and West of Scotland Technical College became in 1964). After Blyth's death, the initiative for the development of wind power passed to Danish and later to American engineers. The turbine at Montrose asylum was dismantled in August 1914. Britain's first public utility turbine began operation at Costa Head, Orkney, in 1951—sixty-four years after Blyth's original experiment to generate electricity using the wind.