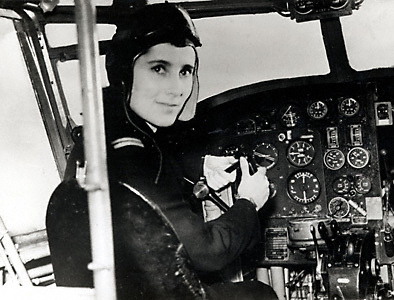 Walker, Diana Barnato [née Diana Barnato] (1918–2008), aviator, was born on 15 January 1918 at 39 Elsworthy Road, Hampstead, London, the younger daughter of Woolf Joel Barnato (1895–1948), financier and racing driver [see under Bentley Boys], and his American first wife, Dorothy Maitland, née Falk (1892/3–1961). Her father, who was a captain in the Royal Field Artillery in the First World War, had inherited, at the age of two, the millions accumulated by his father Barney Barnato, the South African diamond magnate. After the war he became one of the celebrated ‘Bentley boys’ (he also bought a majority share in the Bentley company, of which he became chairman in 1925), and a highly successful racing driver, winning the Le Mans 24 hour race in 1928, 1929, and 1930. During the Second World War he served as a wing commander in the RAF, with responsibility for the defence of airfields in southern England.

Diana Barnato and her sister, Virginia, enjoyed the pleasures of high society, though Woolf separated from their mother when Diana was four. While their mother brought the girls up she maintained an amicable relationship with their father (who had two sons with his second wife, and married a third time shortly before his death). Diana was educated at Queen's College in Harley Street, London, until 1936, when she came out as a débutante and ‘did the season’. Disenchanted by the social rounds, she invested her allowance in flying lessons at the Brooklands Flying Club in Surrey at £3 per hour, rather than learn with the Civil Air Guard for a mere 7s. 6d. per hour. She wrote, 'I was far too much of a snob to go to learn to fly with what I thought would be the hoi polloi' (Spreading my Wings, 34). Having gone solo after six hours on a de Havilland Tiger Moth she ran out of money and had to stop.

Following the outbreak of the Second World War Diana Barnato worked as a Voluntary Aid Detachment nurse and with the Red Cross, but was attracted by the chance of flying with the Air Transport Auxiliary, although she had only ten hours' flying experience. She was tested by the chief flying instructor, but a riding injury then laid her up for six months. Meanwhile the Air Transport Auxiliary had set up a training programme, and after another test in December 1941 she became one of fewer than 170 ‘Atagirls’ (of whom sixteen were to lose their lives during the conflict).

The ATA's pilots ferried all types of military aircraft, from trainers to bombers, from factories to RAF stations or from maintenance units to squadrons. They had minimal pilot's notes and no radios, and often flew in marginal weather conditions. Barnato flew such aircraft as the single-engine Spitfire, Hurricane, Defiant, Mustang, Avenger, Wildcat, Vengeance, Firefly, Barracuda, and Tempest, and twin-engine types like the Oxford, Anson, Wellington, Warwick, Mosquito, Hudson, and Mitchell. She had her share of incidents. While flying a Supermarine Walrus air-sea-rescue amphibian, her least-liked aeroplane, from Cosford to Eastleigh on 19 September 1944, the windscreen was obscured by oil from the failing engine as she approached the Southampton balloon barrage at 1500 feet. Without power she could only push down the nose to prevent a stall and make a steep descent into the sea fog. Luckily she missed the balloon cables and emerged from the cloud a few feet above Eastleigh's grass airfield.

Three weeks after Barnato first met the battle of Britain fighter ace Squadron Leader Humphrey Trench Gilbert in 1942 they became engaged, but days later he died in a flying accident. Two years later, on 6 May 1944, she married another pilot, Wing Commander Derek Ronald Walker, and was docked three months' pay for making an unauthorized honeymoon flight to Brussels four months later in a Spitfire, accompanied by her husband in another. Derek Walker was killed in a flying accident shortly after the war's end, on 14 November 1945.

After the war Diana Barnato Walker, as she was now known, studied for the exams for a commercial pilot's licence, in company with the racing driver and industrialist Whitney Willard Straight (1912–1979), a naturalized American and former RAF air commodore. This led to a thirty-year relationship, and a son, Barney, was born in 1947, though Straight never left his wife, nor did Diana ask him to: 'I was perfectly content. I had my own identity' (The Times, 19 Nov 2005). Having gained her commercial licence she became a pilot for the Women's Junior Air Corps, giving the cadets air experience and training flights at weekends and accumulating many hours in the corps's Fairchild Argus and Auster aircraft. She had just taken off in the newly acquired Argus on 11 July 1948 when it burst into flames. Rather than bale out and lose a valuable aeroplane, she switched off the fuel and glided back to the airfield, where the flames were put out. In 1963, for her work with the corps, she was awarded the Jean Lennox Bird trophy, presented annually to a British woman pilot. On 26 August that year she became the first British woman to exceed the speed of sound, and the fastest woman in the world when she attained Mach 1.65 (1262 mph) in an English Electric Lightning T.4 trainer version of the RAF's front-line fighter. Shortly after this she won a battle with cancer.

In later years Diana Barnato Walker took up sheep farming and was master of the Old Surrey and Burstow foxhounds for thirteen seasons, while continuing to fly for the Women's Junior Air Corps (renamed in 1964 the Girls' Venture Corps). She also became commodore of the Air Transport Auxiliary Association. She died of pneumonia on 28 April 2008 in a hospital near her sheep farm in Surrey, and was survived by her son, Barney.