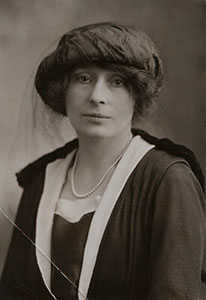 At Rachel Parsons’s birth, her father, Charles, had taken charge of the electrical department of Clarke, Chapman & Co., of Gateshead, Co. Durham, and applied for patents for his invention: a steam turbine. In 1889 he founded the firm of C. A. Parsons & Co. at Heaton, east of Newcastle upon Tyne, to produce a turbo-generating plant; and in 1894, at Wallsend, he created the Parsons Marine Steam Turbine Co. to build engines that would dramatically increase the speed of ships.

The Parsons family lived at various addresses in Northumberland, including Holeyn Hall at Wylam and Ray Demesne, a 10,000 acre estate near Kirkwhelpington. Rachel Parsons was her father’s constant companion while he was busy in his workshop or testing his inventions in the open air, and he did much to influence and encourage her early interest in engineering. The family also owned a town house at 6 Windsor Terrace, Newcastle, not far from Rachel’s first school, Newcastle High, where she showed a talent for mathematics. Under the influence of her mother, Katharine Parsons, who sought the best possible education for her daughter, she was sent to Wycombe Abbey school in Buckinghamshire before moving to Roedean in Sussex, which she attended from 1900 to 1903. In April 1910 she was admitted to Newnham College, Cambridge, to study mechanical sciences and was the first woman student of engineering at Cambridge. Taught by Professor Bertram Hopkinson, she passed the preliminary examination for part one of the tripos and a qualifying examination in mechanical sciences in 1911, but, as was common at the time, she did not complete the tripos, and she left the university in 1912.

When her brother joined the army following the outbreak of the First World War, Parsons took his place as a director of the Parsons Works at Heaton, becoming one of the first female directors of a large industrial concern in Britain. Her first task was to support and instruct the women workers at the factory, who grew hugely in number after the creation of the Women’s War Register in March 1915 and the march in London in July 1915 organized by Emmeline Pankhurst, demanding women’s ‘right to serve’. On that occasion her mother Katharine, Lady Parsons was among the women who presented a petition to David Lloyd George, minister of munitions. Rachel Parsons joined the training department of the Ministry of Munitions. The department had been set up to meet the need for qualified engineers to instruct unskilled workers all over the country how to perform a host of different engineering tasks—not only repetitive work such as filling shells but also, for example, making optical instruments such as telescopes and searchlights and building turbines, ships, and aircraft wings.

At the end of the war, Katharine and Rachel Parsons, mother and daughter, articulated the anger at the Restoration of Pre-War Practices Act 1919, which made it illegal for a woman to be employed in any engineering trade where female workers had not been employed before the war. They co-founded with others the Women’s Engineering Society to campaign for women’s employment rights in industry and technical education. In January 1919, Rachel Parsons became the first president of the society, a position she held until 1922, when she was succeeded by her mother. In an article of December 1919 in National Review magazine, she highlighted the ‘extraordinary’ fact that, although women could now become MPs, doctors, lawyers, and scientists, in the ranks of industry they were in a worse position than before the war, and this must be opposed: ‘Women have won their political independence. Now is the time for them to achieve their economic freedom too.’ In 1921 she, Eily Keary, and Blanche Thornycroft were the first women to join the Royal Institute of Naval Architects as associate members.

In 1922 Rachel Parsons was elected to represent the Municipal Reform party in the borough of Finsbury on the London County Council (LCC), a position she held for three years. In the general election of 1923, she stood as a Conservative in the parliamentary seat of Ince, Lancashire, but was defeated by her Labour opponent. In all these ventures, her main purpose was to enhance women’s economic freedom and employment rights. She continued, without success, to seek a parliamentary seat until the late 1930s.

After the deaths of her parents in the early 1930s, Parsons inherited £840,000, along with the Ray estate in Northumberland, which she rarely visited. She owned a succession of houses in London, in Grosvenor Square, Belgrave Square, and Hyde Park Gardens, where she hosted lavish parties and concerts, but she never enjoyed the role of society hostess. She lived in an age when spinsters, especially rich and educated spinsters, were regarded with suspicion and hostility, and she became increasingly isolated. Her one pleasure was the turf. In the 1930s she became a racehorse owner and, with the help of leading trainers, achieved some notable early successes with horses such as Davy Dolittle and Battle Cruiser. By the time of her death, she owned seventy-two horses, including several brood mares, her most successful racehorse being Le Dieu d’Or. But even in the world of horse-racing, her status as a wealthy single woman told against her.

After the Second World War, Parsons moved to Newmarket in Suffolk, the home of British horse-racing, where she bought Branches Park estate and stud farm at Cowlinge, outside the town, and, later, Lansdowne House in Falmouth Avenue. In Newmarket, her social isolation increased and she made enemies. On the night of 1 July 1956, she was bludgeoned to death at Lansdowne House by Dennis James Pratt, a former employee. Since she was reckoned to be one of the richest people in Britain at the time, her violent death made headlines, but money did not seem to be the motive for the killing.

Dennis Pratt was charged with murder but convicted of manslaughter on the grounds of provocation. His defence lawyer was Michael Havers, a future attorney-general, who had called a succession of witnesses with a grudge against Rachel Parsons, destroying her reputation. Lurid coverage of the trial in the press reached a low when she was described in the News of the World as a ‘she-devil’. Earlier, Anne Parsons, countess of Rosse, had written of her as ‘no ordinary woman … The daughter of one of the greatest scientific geniuses that this country has ever produced, she inherited much of her father’s brilliant technical brain and volcanic temperament’ (The Times, 18 July 1956). The disillusion of the ‘lovable, headstrong and attractive girl, brimming over with enthusiasm and with her father’s desire to achieve’ (ibid.), remembered by many, was ascribed to the social conventions that had prevented her from pursuing the career she yearned for. She died intestate and her estate was eventually divided between twenty-eight cousins.