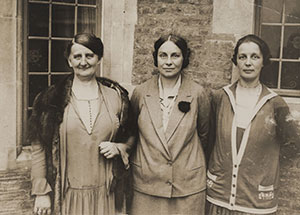 WES and The Institution of Engineering and Technology Archives

Partridge, Margaret Mary (1891–1967), electrical engineer, was born at Barton, Nymet Rowland, Devon, on 8 April 1891 (b. cert; her gravestone gives 18 April 1891), the elder daughter in the family of two daughters and two sons of John Leonard James Partridge (1859–1922), of independent means, who was from a Devon family which owned farmland in the area of Willand, and his wife, Eleanor Parkhouse, née Joyce (1858–1926). The family later moved to Bedford where Margaret and her siblings were educated. The parents ensured that their daughters received as good an education as their sons: Margaret’s younger sister (Eleanor) Joyce trained as a doctor, while Margaret herself attended the High School, Bedford, and Bedford College, London, where she was awarded the Arnott and Jane Benson scholarships at Bedford, and graduated with a London University BSc (mathematical honours) in 1914.

At this time the accepted profession for female mathematics and science graduates was teaching. Partridge was appointed assistant mistress at Saltburn High School, but her letter of recommendation from the principal of Bedford College, Margaret Tuke, was prescient concerning her future career: ‘She is also likely to prove successful in a non-scholastic post, where her powers as an organiser will have scope’ (RHUL Archives, student file 1135).

This scope would be provided by engineering. In 1915, having decided her future career was not in teaching, Partridge was once again recommended by Tuke for a post, this time with the London consulting engineer A. H. Barker, which she took up. In 1917 she moved to the engineering firm Lyons and Wrench, to work in munitions. Wartime conditions enabled her to gain a range of experience as an engineer and a supervisor, but following the return of men from the front at the end of the war, access to posts with this level of engineering experience was severely limited. In 1919 she moved home to Devon, where she set up as an independent consulting engineer.

In 1920 Partridge joined the Women’s Engineering Society (WES), which had been founded in 1919. The personal and professional connections engendered by the WES were a source of support for the new business. M. Partridge and Co., Domestic Engineers advertised themselves as electrical specialists in the WES journal with the strapline ‘Women for Women’s Work’ (The Woman Engineer, vol. 1 no. 13 [1922]). The new company focused on providing lighting and electric power for farm and country houses in the area. In 1922 she put on an exhibition of electric models and machines in Exeter, including a range of labour-saving devices aimed at women in the home. It was predicted that her exhibition would ‘stir up the women of Exeter to demand the installation of electricity’ (The Woman Engineer, vol. 1 no. 17 [1923]). In 1924, the Electrical Association for Women (EAW) was founded, in part to encourage the use of electricity in the home. Partridge became an active supporter and a close friend of the EAW’s director, Caroline Haslett. She went on to be appointed the EAW Organizer for the South West region and was one of the principal authors of the EAW’s cornerstone publication, the Electrical Handbook for Women.

As a consulting engineer, Partridge was faced with the difficulty of raising capital and being taken seriously as a professional woman. In 1923, she set out the problems of managing engineering contracts. She stated that being a woman was not an ‘almost insuperable obstacle’ but could be an advantage, as ‘there is little likelihood of their forgetting us’ (The Woman Engineer, vol.1 no. 15 [1923]). Her first rural electrification scheme was in Bampton, a contract gained in 1925 with the support of the electrical engineer Dr John Purves. She canvassed for shareholders among WES members, including Lady Parsons and Lady Shelley-Rolls, and the scheme was completed in 1926. She wrote to her friend Caroline Haslett from the power station, ‘My dear – for sheer exciting experience give me a town to light’ (Partridge to Caroline Haslett, n.d., Inst. ET UK0108 NAEST 092/4.9.68). Many residents, though, were suspicious of the new electricity supply, and she reported that ‘a man met me in the road and threatened to cut down some wires because he didn’t like the look of them’ (ibid.). Another enraged resident objected to wires being strung across the end of his property and called the police. In the end, the lights went on and neighbours flocked to witness the exciting phenomenon (and to complain that their own wiring was not completed).

Partridge employed several engineers and apprentices, including women. She had stringent standards for her employees, and her first female apprentice was criticized for not wanting to work in the power station under the same taxing conditions as everyone else. In 1926 she took on another woman apprentice, Beatrice Shilling, who threw herself into all aspects of engineering work and was later encouraged by Partridge and her partner, Dorothy Rowbotham, to study engineering at university, becoming an aeronautical engineer. Shilling’s enthusiasm, and the willingness of her employer to work late into the night, led to a change in international regulations on women’s employment. Shilling was discovered working solo in a power station after 10 p.m., in contravention of the International Labour Organisation (ILO) convention on night working for women and children. The WES lobbied the ILO to change its regulations, and, in 1934, the international convention was altered to exclude ‘women holding responsible positions of management’ (ILO C041 - Night Work (Women) Convention (Revised), 1934 [No. 41)]).

On the outbreak of the Second World War, Partridge founded and was the director of Exeter Munitions Ltd. She was also appointed the Women’s Technical Officer for the South West, advising factories on the employment of women. She was appointed vice-president of WES in 1942 and president in 1943, a post she held until 1945. On retirement in 1946, she took an active interest in local activities in Willand, where she lived with her former business partner Rowbotham. Under her supervision the wiring of the new village hall was completed by members of the Women’s Institute. She also acted as a director of two nursing homes, where her sister was chief doctor. She died at her home, Harpitt, Willand, Devon, on 27 October 1967 and was buried in the churchyard at Willand.