Black people have lived in the British Isles since Roman times and their lives have been the focus of increasing scholarly, public, and media interest over the last several decades. The original nineteenth century Dictionary of National Biography (1882–1900) had virtually nothing to say on the subject of black lives. However, both the modern edition of the Oxford Dictionary of National Biography (2004) and the ongoing releases of lives since then have sought to address and expand this previously neglected area.

The coverage of early black British history in the Oxford Dictionary of National Biography (ODNB) has, perhaps understandably, tended to focus on the story of the struggle for the abolition of slavery. The emphasis on this period is clearly visible when the number of lives of those of African origin included in the ODNB for their significance in British history is viewed chronologically. The following table shows the number of lives of people of broadly African origin included in the ODNB for their British historical significance chronologically by half century (i.e. 1501-1550, etc), with the total number of lives in the ODNB across the same period for comparison.

Amongst the many notable black lives from the period of slavery and abolition are: Olaudah Equiano (c. 1745–1797), whose Interesting Narrative of the Life of Olaudah Equiano (1789) has become perhaps the best known inpidual account of enslavement and the Atlantic crossing; the author and correspondent Ignatius Sancho (1729?–1780); and the adopted daughter of Lord Mansfield, Dido Belle (1761?–1804), who was recently the subject of the film Belle (2013).

However, a new generation of scholarship is challenging some of the fundamental assumptions of early black British history, widening its scope, and in doing so throwing new light on the topic. Most importantly this scholarship has shown that there was no formal legal code of slavery in sixteenth century England and challenged the idea that the institution of slavery defined the lives of black people in Britain at that time. Just as significantly, new research also shows the very wide spectrum of people of African origin living in Britain across the sixteenth to eighteenth centuries. These people came to Britain for a variety of reasons (or were born here), were dispersed geographically, and engaged perse professions from servants to visiting diplomats – the multiplicity of lives that they lived are difficult to generalise into simple overarching narratives. 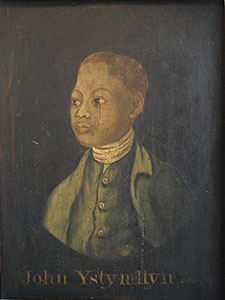 The October 2019 Black Lives release of the Oxford Dictionary of National Biography draws upon the scholarship of Miranda Kaufmann (who has co-edited the release), Kathleen Chater, Onyeka Nubia, and many others, who have been at the forefront of this widening of the scope of early black British history over the last decade. The release adds 23 new black lives to the ODNB; eleven of these are pre-1700, which represents a dramatic improvement of the dictionary’s coverage of early history.

Amongst the interesting lives included in this release are Jacques Francis (b. 1524?), a specialist per who was employed on the salvage of the wreck of Henry VIII’s warship Mary Rose, and whose involvement in a subsequent court case is both one of the earliest examples of a black person’s recorded direct speech in Britain, and much cited in debates over the existence (or otherwise) of slavery in sixteenth century England. Diego (d.1579) was an African enslaved in Nombre de Dios who escaped and played a key role in Francis Drake’s capture of a Spanish silver train in Panama. He later became a member of the Drake’s household and joined the latter’s circumnavigation voyage. Henrie Jetto (1569/70–1627) is the earliest black person to leave an extant will in England, from which we know he was a yeoman and thus had the right to vote in local elections. Catalina of Motril (fl. 1501–1531) was a Moorish maidservant to Catherine of Aragon, whose testimony played an important part in Spanish depositions investigating the validity of Catherine’s marriage in 1531. The following century Juan de Bolas (d. 1663) was the leader of a free African community in Jamaica – which may have been a precursor to the later Maroon communities – who has both a mountain and a river named after him in modern Jamaica.

However, perhaps most emblematic of the theme of this release is John Ystumllyn (d. 1786), who after being taken from Africa as a child and given to the Wynne family, became a gardener living and working in Ystumyllyn in north Wales. John went on to marry a local girl, settle in Ynysgain Fawr, west of Cricieth, and live a largely peaceful life. A stone to his memory was raised in the churchyard at Ynyscynhaearn and in the nineteenth century the minor printer, poet, and author Robert Isaac Jones (‘Alltud Eifion’) wrote a short biography of this respected and popular local notable whose settled life existence in rural Wales reminds us of the persity of the historical experience of black people in Britain.

Dr Anders Ingram is an early modern historian and research editor for the Oxford Dictionary of National Biography. The Black Lives release, co-edited with Dr Miranda Kaufmann – author of Black Tudors (2017) – was published in October 2019.

The Oxford DNB is updated regularly throughout the year, giving you access to the most up-to-date and accurate information available. Nearly all public libraries in England, Scotland, and Wales—and all in Northern Ireland—subscribe to the Oxford DNB. This means you can access tens of thousands of biographies, free, via your local library—anywhere, anytime. Full access to all biographies is also available by individual subscription.

Discover a full list of entries added this year.