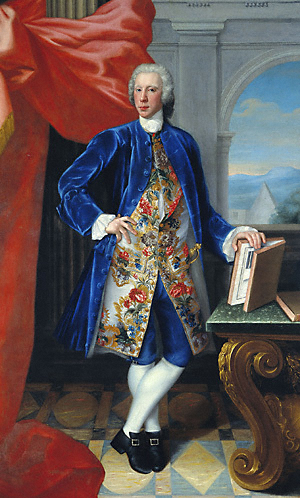 Culzean Castle collection; courtesy of The National Trust for Scotland

Kennedy, Thomas, ninth earl of Cassillis (1726–1775), smuggler and landowner, was born on 12 February 1726, the seventeenth child and second surviving son of Sir John Kennedy of Culzean, second baronet (d. 1742), and Jean Douglas (d. 1767), daughter of Andrew Douglas of Mains, Dunbartonshire. His father was a Jacobite, who had turned to smuggling, using the caves underneath his castle on the Ayrshire coast to store his contraband. Nothing is known of Kennedy's education, but probably like his brothers he attended the University of Glasgow. He inherited the baronetcy on the death of his brother John in April 1744. Instead of devoting himself to the Culzean estate, he had already decided on a military career in the British army, serving as an ensign in the 33rd regiment in the Netherlands from October 1744. While there he struck up friendships with James Caulfeild, fourth Viscount Charlemont, Francis Willoughby, third Baron Middleton, and John Ward, later Viscount Dudley and Ward. He purchased a captaincy in 1745 and took part in the battle of Fontenoy. His regiment was recalled in September to meet the threat of the Jacobite rising. He took part in a skirmish at Fort William in the spring of 1746, and was back in France by October.

Kennedy left the army the following year, appointed Archibald Kennedy, an Ayrshire wine merchant, to factor his estate and to manage the family's smuggling enterprise, and set off on an extended grand tour. In 1748 Kennedy travelled to the Académie d'Équitation at Caen, Normandy, studying riding, fencing, music, and languages there. He seemed to revert to his family's Jacobite roots, taking a reputed Jacobite named Bulstrode as his tutor. In 1750 he travelled to the French court to learn the bass viol just as his Jacobite grandfather Sir Archibald ‘the Wicked’ had done. He remained in France from 1748 to 1750, writing constantly to his factor about improvements to the estate and to the castle, which included a new dining room and an elaborate entrance gate. He then moved to Rome, where several of his army friends were living, including Charlemont and Ward. He was in Italy for several years, becoming a well-known figure among the British connoisseurs, and featuring in Joshua Reynolds's Parody on Raphael's ‘School of Athens’, playing his bass viol with a thistle in his hat. Acquaintances made in Italy included Abbé Peter Grant, a Jacobite. Kennedy also purchased a papal indulgence. He bought several paintings, and ten cases of statuary, probably for the rooms he had altered or added at Culzean. He was an accomplished linguist, speaking at least French and Italian, and possibly German, and engaging in literary projects.

On his return to Scotland in 1755 Kennedy began determinedly to improve his vast estate of over 250,000 acres. Many of the plans executed during his absence abroad had been opposed by his mother, who moved out of Culzean in 1753 taking several items of furniture with her; these in the event made room for items brought by Kennedy from the continent. He enclosed the more fertile land along the shore and up the river valleys. To help him he recruited John Foulis, the son of the factor to the earl of Eglinton, to act as his overseer. He commissioned Foulis's father to survey parts of the estate and analyse the likely returns from improvement schemes. He also turned his attention to the garden and the castle policies, planting shelter belts and growing exotic fruit trees. He built himself a fine Palladian villa in nearby Maybole, presumably as a winter retreat. He continued smuggling, even though after the outbreak of the Seven Years' War in 1756 there was a danger that those who were caught would be pressed into the navy. Commodities traded included soap, port, burgundy, genever, claret, and green and black tea. Goods were run in wherries, flat-bottomed fast boats that could be beached at Culzean, and the goods taken into the caves in front of the castle. A further addition to the castle, in 1760, was a new library, which Kennedy stocked with several of the most recent or celebrated works of natural philosophy, literature, and history. He was advised in part by the painter Gavin Hamilton.

In 1758 John Kennedy, eighth earl of Cassillis, Sir Thomas Kennedy's fifth cousin and head of the wider Kennedy family, died childless, having previously entailed the Cassillis estate on Sir Thomas Kennedy and his heirs male, failing which, on his next brother David Kennedy. This assumed that Kennedy, as heir male, was heir to the Cassillis title, which with the estate was also claimed by the heir general, William Douglas, third earl of March, whose mother was a daughter of the seventh earl. The court of session ruled in favour of Kennedy by a narrow margin; March took the case to the House of Lords, which ruled that Sir Thomas Kennedy was indeed ninth earl of Cassillis in January 1762. The new earl took possession of Cassillis House, inland from Culzean, along with the estate that adjoined Culzean and a London town house. He began to improve the Cassillis estate as well as Culzean. He visited Italy again in 1764 where he sat for the fashionable portrait painter Pompeo Batoni. Visiting Madeira, Marseilles, Montpellier, and Geneva, he did not return home until 1765, when he began work on a new wing to the castle overlooking the sea that included a casino, billiard room, and additional bedrooms. The castle itself was completely refurbished. A passionate sportsman, he constructed a hunting lodge in the wild and beautiful hill country on the border of Ayrshire and Wigtonshire, with spectacular views to the Galloway hills. These developments were accompanied by further improvements. John Bulley, an Essex agriculturalist, was recruited as overseer to replace John Foulis, who had died, and to introduce new ideas from the south.

Smuggling became more difficult after the removal of a major smuggling centre with the purchase of the duke of Atholl's lordship of the Isle of Man by the British crown in 1765. By this time Cassillis was probably already engaged in the slave trade through his former smuggling agent Robert Kennedy, who between 1767 and 1774 owned four slave ships called Lord Cassillis, suggesting that the earl was an investor. He had a long-standing association with Scipio Kennedy, a freed slave who had previously worked for his father as a personal servant. Cassillis bought a new home for Scipio at Culzean on a plot that cost the considerable sum of £90 sterling. About 1767 Cassillis acquired land in Florida, intending to produce rice, cotton, and indigo, but sold it in 1770 in the shadow of political discontent in North America. He retained a sixteenth share in an East Indiaman, the Bute, acquired at about the same time as the Florida property, which made several profitable voyages. He also speculated with success in East India stock between 1769 and 1771. To the concern of his Edinburgh lawyer, John Bell, he borrowed heavily to finance these investments and the improvements to his estate. He was neither a shareholder nor major depositor in Douglas, Heron & Co.—the Ayr Bank—but many of his tenants were involved or paid in Ayr Bank notes, and the earl's finances were badly damaged by the collapse of the bank in 1772.

Although he had not engaged much with either society or politics in Britain, he was elected, to his surprise, a representative peer for Scotland in 1774, very probably because of his brother David's alliance during the 1774 election with John Campbell, fourth earl of Loudoun, and the government interest in Ayrshire. He only enjoyed the position for a year, dying in Edinburgh on 30 November 1775. He was full of contradictory passions, an aesthete and a musician who was devoted to the chase, a student of classical antiquity who restored and preserved his family's ancient strongholds, and a soldier in the protestant cause who flirted with Jacobitism and even Roman Catholicism. He never married, and was succeeded by his brother David.