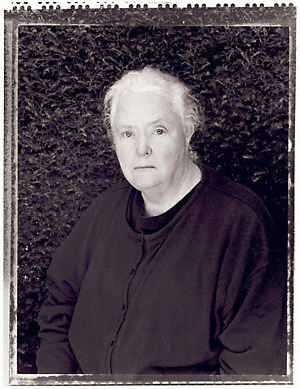 Oman, Julia Trevelyan [married name Julia Trevelyan Strong, Lady Strong] (1930–2003), designer and gardener, was born on 11 July 1930 at 30 Abingdon Villas, Kensington, London, the elder child and only daughter of Charles Chichele Oman (1901–1982), silver historian and later keeper of the department of metalwork at the Victoria and Albert Museum, and his wife, Joan (1901–1973), youngest daughter of Sir Ernest John Trevelyan, high court judge in Calcutta and reader in Indian law at Oxford. Sir Charles William Chadwick Oman, historian, was her paternal grandfather, and the historian Carola Oman was an aunt; on her mother's side she came from the Trevelyan family of historians. She was educated at a boarding school, which she later described as 'a cruel place' (The Times), then at Wimbledon College of Art, and finally at the Royal College of Art, as a royal scholar, where she studied interior design and won the silver medal on graduation in 1955.

After graduating Oman joined BBC television as a set designer, working on up to six sets a week for productions as diverse as Dixon of Dock Green, Compact, and Six-Five Special. The turning point came when she won the designer of the year award for her contribution to Jonathan Miller's 1966 television production of Alice in Wonderland. The skewed Victorian world created for this quirky, star-studded version of Alice opened career doors, leading to the worlds of film, theatre, ballet, and opera. Now a freelance, she was suddenly in demand at the highest levels. Tony Richardson asked for her for his new film, The Charge of the Light Brigade (1968); as associate art director she created English domestic scenes, the country wedding and cottage, which were pure Pre-Raphaelite, reminiscent of Burne-Jones and Millais. She went on to design three more films, but her true artistic home was the theatre. In 1967 there was a summons from the Royal Ballet, in response to a portfolio of designs she had left for consideration years earlier, for a ballet based on Elgar's Enigma Variations. Realized in 1968, choreographed by Frederick Ashton, this classic production led to other collaborations with Ashton, notably A Month in the Country (1976), with romantic designs beautifully evoking the Russia of Turgenev and Pushkin.

Growing up among the collections of the Victoria and Albert, and with her family background, a love of history, art, and documentation were in her blood. As a designer Oman was renowned for her intensive research, quest for authenticity, attention to detail, and visual appreciation. Once the chosen period and 'look' of a production were set, she immersed herself in time, place, character, and atmosphere. Her theatre breakthrough came in 1967 with Brief Lives, starring Roy Dotrice as the seventeenth-century antiquary and author John Aubrey. Oman's amazing set—described by the director Patrick Garland as 'Jacobean kitchen-sink'—was a mirror of the main character, fascinating audiences with its overwhelming array of clutter, including genuine period books and furniture, complemented by dust, desiccated flowers, and real decaying fruit, all carefully assembled by Oman. She brought the same attention to detail to all her projects, memorably evoking the world of Samuel Pepys for an exhibition at the National Portrait Gallery in 1970; travelling to Leningrad to research designs for a magnificent Eugene Onegin (directed by Peter Hall at the Royal Opera House, 1971); photographing the Venice ghetto in preparation for Jonathan Miller's The Merchant of Venice, set in the 1880s, with Olivier's Shylock as a frock-coated banker (National Theatre, 1971); and recreating an authentic period shoemaker's shop for John Dexter's production of Thomas Dekker's Shoemaker's Holiday (National Theatre, 1981). Among her most lasting triumphs were a trio of classic productions for the Royal Opera House: a definitive La Bohème (John Copley, 1974), still in the Covent Garden repertoire over three decades later; a sumptuous Die Fledermaus (Leopold Lindtberg, 1977), with a ball scene evoking Tissot paintings of the 1870s; and a dazzling Nutcracker (Peter Wright, 1984), with a Biedermeier vision of Christmas. She also designed a stunning version of Arabella for Glyndebourne's fiftieth anniversary season, in 1984.

The year 1967 was also a personal turning point: she first met Roy Colin Strong (b. 1935), author and art historian, who was then working as an assistant keeper at the National Portrait Gallery; she had been given an engraving of Elizabeth I by her father and, wanting to know more about it, had been advised by him to 'go and see young Strong at the National Portrait Gallery' (The Times). A discreet courtship ensued, and they married—romantically 'eloping' after the première of her Othello at Stratford—on 10 September 1971 at St Andrew's Church, Wilmcote, Warwickshire (the village of Shakespeare's mother, Mary Arden). Strong was by then director of the National Portrait Gallery, and was later director of the Victoria and Albert Museum, from 1974 to 1987. He was knighted in 1982. Oman (who continued to use her maiden name after her marriage) collaborated with her husband on several books, including Elizabeth R (1971), The English Year (1982), and, appropriately, On Happiness (1998).

Soon after their marriage, Oman and Strong had bought an early nineteenth-century rectory, The Laskett, in Much Birch, Herefordshire, with one and a half acres of garden, to which they soon added an adjacent two-acre field, which they proceeded to turn into one of the most celebrated of twentieth-century gardens. Perhaps surprisingly it was Strong who did most of the designing, while Oman developed her talent as a plantswoman. In an essay published in the garden periodical Hortus in 1992 Strong movingly described their garden as 'a portrait of a marriage, the family we never had or wanted, a unique mnemonic landscape peopled with the ghosts of nearly everyone we have loved, both living and dead' (Strong, The Laskett, 23).

Oman (named a royal designer for industry in 1978, and made a CBE in 1986) was a forceful, knowledgeable, and self-confident woman, noted in life as in her work as a stickler for accuracy. Nevertheless she was also warm, generous, approachable, and unfailingly helpful to younger designers. Her final years were clouded by the onset of cancer of the pancreas, from which she died at her home, The Laskett, on 10 October 2003. She was survived by her husband, Sir Roy Strong; there were no children of the marriage. Strong donated her archive, spanning almost forty years of her design work, to the University of Bristol Theatre Collection in 2004.