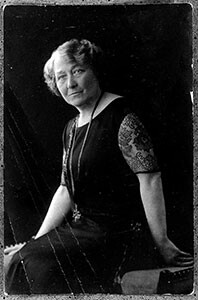 Barrett [née Perry; other married name Willey], Florence Elizabeth, Lady Barrett (1867–1945), obstetric and gynaecological surgeon, was born at Compton Henbury, Gloucestershire, on 18 February 1867. She was the fourth of six children (five of whom survived childhood) of Elizabeth, née Willey (1837–1914), and her husband, Benjamin Perry (1834–1902), a businessman in the Bristol area who owned a warehouse and ice storage facility, and was a railway agent. Her early education was at home with governesses but, aged fifteen, she received freehand and model certificates as well as geometry and perspective prizes from the Bristol School of Art. Although later regretting her lack of education, she excelled once she undertook formal studies. In 1889 she began preliminary medical study under a Bristol general practitioner and medical missionary, William Elder. As a student at University College, Bristol, and at the Clifton Laboratory, she passed the University of London matriculation in June 1893 and registered as a medical student in November 1893. She was placed in the first division in the preliminary scientific (MB) examinations in 1894. At the same time she passed the mathematics section of the University of London intermediate examination in science and proceeded to the BSc examination, which she passed in November 1895 in the first division. On 27 February 1896, at the Christ Church Congregational chapel, Sneyd Park, Barton Regis, Bristol, Florence Perry married her cousin, Frederick George Ingor Willey (1864–1947), a surgeon; he was the son of Josiah Willey, also a surgeon. They settled at 8 Avenue Road, Highgate, where her husband had consulting rooms. They had no children.

Florence Willey went on to study at the London (Royal Free Hospital) School of Medicine for Women (LSMW) where, in 1898, she was placed in the first division of the London intermediate MB, and gained prizes in anatomy and materia medica. She qualified MB in October 1900, with honours in obstetrics, received a MS in 1904, and became an MD, through her work in midwifery, two years later. From 1902 she worked at the Royal Free Hospital, London, respectively as clinical and assistant pathologist (1902), medical registrar, radiographer (1903), surgical registrar (1903–6), anaesthetist (1906), and, after the retirement of Mary Scharlieb, assistant physician for the diseases of women (from 1908) under Ethel Vaughan-Sawyer, who stepped into Scharlieb’s role as physician. She also succeeded Scharlieb as lecturer in midwifery at the Royal Free Hospital in 1913, a post she held until 1921, and eventually became consulting obstetric and gynaecological surgeon.

Florence Willey’s extant case notes indicate a wide range of expertise across obstetric and gynaecological conditions, including radical procedures for cancer, such as Wertheim’s operation, and caesarean sections needed for, among others, those women marred physically by the effects of childhood rickets. Such work revealed the value of applying modern surgical techniques to the improvement of obstetrics and gynaecology. Experience at the Royal Free and other metropolitan hospitals, alongside a large private practice, instilled in her a lifelong sense of the need to support, protect, and value the health of women and children.

From 1909 she published articles in the Proceedings of the Royal Society of Medicine and other medical journals on subjects including gynaecological and obstetric complications, and benign and malign tumours. She also wrote A Plea for the Feeding of Nursing Mothers as a Means for Preventing the Waste and Maiming of Child Life (1912) and Diseases of Women: A Handbook for Nurses (1912). In an address to the students at the LSMW in 1915, she stated her belief in integrated, modern healthcare, through research that combined the laboratory worker and the clinician with the sociologist; doing so would allow the stamping out of disease through a wider recognition of the lives and habits of the people whom all sought to protect. As a member of the National Union of Women’s Suffrage Societies (NUWSS), she signed the medical practitioners’ petition in July 1912 against forcible feeding of the suffragettes. She was elected to the council of the NUWSS in June 1915.

Florence Willey’s full and successful early professional career masked a traumatic personal life. In 1909 she brought divorce proceedings against her husband, alleging that he was adulterous and violent. By 1905 she was living at Devonshire Street, Portland Place. They formally separated in 1908. Her divorce petition, which was undefended, was heard in May 1909, and she was granted a final decree in November 1909. A second marriage, in London on 10 February 1916, to the physicist and founder of the Society for Psychical Research, Sir William Fletcher Barrett (1844–1925), then aged seventy-two, was a much happier experience.

Florence Barrett (now formally styled Lady Barrett) was active in the administration and education of medical women, nationally and internationally, as well as in female sexual health, and infant and maternal welfare. She gave evidence to the Royal Commission on Venereal Diseases (1916). During the First World War she was also involved in the distribution of financial assistance to families of professional men via the Professional Classes War Relief Council. She was appointed CBE in the first honours list for the newly created Order of the British Empire published in August 1917.

From 1917 Barrett was a member of the Eugenics Society, belonging to committees on the subject, and taking part in debates over the uses of contraception and its impact upon the birth rate. She was a member of the commission of inquiry of the National Council of Public Morals into the causes and effects of the declining birth rate, which was instituted in 1913 and published its report in 1916. In 1922 she published Conception Control and its Effects on the Individual and the Nation, laying out her opposition to birth control as a means of regulating pregnancies for wealthy and healthy women. Although she feared the decline of the physically ‘fit’ middle and upper sections of society, she was vehemently opposed to working-class women’s fertility being regulated before their overall living standards and environment had been improved and their menfolk educated. This ‘remedy’ of ‘raising … the standard of living of working class mothers’ put her at odds with some eugenicists (R. A. Fisher in Eugenics Review, 14/4, Jan 1923, 281).

In all of Barrett’s work on infant welfare she stressed the importance of the need to improve the mother’s condition as a way of reducing infant mortality. An experiment that she carried out in the 1910s, which encouraged the consumption of meat and vegetables by pregnant women, who often lived on the staple working-class diet of bread and tea, had given the resulting child a headstart in life as far as nourishment was concerned. She also believed that midwifery needed to be treated as seriously, and to be studied scientifically, in the same fashion as any other branch of medicine, and that maternity should be supported by the state. She became honorary obstetric surgeon at the Salvation Army-run Mothers’ Hospital, Clapton (opened 1913) and honorary consultant surgeon to the much-lauded, all-female-staffed, Marie Curie Hospital in Hampstead (founded in 1929); both connections were maintained until her death.

Barrett was in great demand as a speaker in the 1920s and 1930s, especially on the health of women and children.

She was a member of the parliamentary subcommittee (1921–7) and then the committee on maternal mortality and morbidity (1927–8). She also sat on the commission on the relation of the sexes for the Conference on Christian Politics, Economics and Citizenship (1924). She was a member of the Association of Registered Medical Women, president of the London Association of the Medical Women’s Federation (MWF), and vice-president and later president of the MWF itself between 1922 and 1924. She took up the issues of medical women’s equal pay and status in the workplace, and the establishment of a MWF loan fund in 1923 for starting general practice. She held the presidencies of the obstetrical and gynaecological section of the British Medical Association in 1925, and of the International Medical Women’s Federation from 1925 to 1929. In March 1929 she was appointed a Companion of Honour.

Barrett was dean of the London School of Medicine for Women between 1925 and 1931, and then became the third president of the school in March 1931. Under the auspices of the Medical Research Council she directed scientific studies into pregnancy and the lying-in period at the Royal Free Hospital, where she was instrumental in procuring the obstetric unit, run by Louise McIlroy, and was involved in research into the use of radium for uterine cancer.

Barrett shared her second husband’s interest in spiritualism, which resulted in her publication of posthumous conversations with him, held through a medium in the 1920s and 1930s. Personality Survives Death: After-Communication from Sir William Barrett (1937) presented William Barrett’s encounters in the afterlife, including interplanetary travel and voyages to lost societies, such as Atlantis, alongside predictions about the likelihood of war, scientific pronouncements on the benefits and dangers of radium and of anaesthetic, and more personal recommendations for domestic improvements.

Latterly Lady Barrett’s homes were at Cookham Dean and then at Maidenhead, Berkshire. She died at the Elizabeth Garrett Anderson Hospital, Euston Road, London, on 7 August 1945. The primary cause was noted as heart failure and the anaesthetic used for operation; the secondary, carcinoma of the breast. Most obituaries had placed her death at home in Maidenhead: a female surgeon dying on the operating table from the effects of surgery for a condition she had treated for several decades was perhaps too painful an irony for her colleagues. A skilled surgeon and an expert administrator, she was lauded by contemporaries as an exemplar to all medical women. Her funeral took place at Cookham Dean Parish Church in Berkshire on 10 August, and a memorial service was held at St Martin-in-the-Fields five days later.