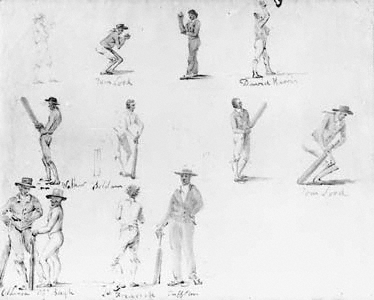 Hambledon cricket club (act. c. 1750–c. 1796), named after the village of Hambledon, near Portsmouth in Hampshire, affords the earliest major documented source for the administration, membership, and activities of a game which had been played in England for over a century. Its first recorded match was in 1756 against Dartford and its oldest surviving player, William Beldham 1766–1862 [see below], told the cricket historian James Pycroft that he believed the club had existed in 1750 on Broadhalfpenny Down. Beldham probably meant a team in the parish. The actual word ‘club’ is not found being used until 1761. Various reasons may be offered to suggest why cricket flourished so much in an obscure village in the south of England. A local clergyman, Charles Powlett (1728–1809), according to Beldham, supplied much of the enthusiasm and leadership. Equally important, the chalk downlands of unenclosed pasture, closely cropped by sheep, offered ideal conditions for playing. Hambledon itself was near enough to London to provide a country retreat for some 150 members over the years, who were either aristocrats, soldiers, clergymen, or gentry; those who actually played the game were either yeomen or of peasant stock—Charles Bennett, fourth earl of Tankerville (1743–1822), was the exception as a ‘given’ player and not a member. Richard Nyren (1734–1797), publican, baker, and cricketer, was the intermediary who, as captain, secretary, groundsman, and landlord of the Bat and Ball, steered the club through its greatest years. As a player, he scored 98 against Surrey in 1775. The detailed club accounts show him buying claret for the members, settling Farmer Garrett's bill for 10 guineas for the use of the ground, and paying the players. He, together with the shoemaker William Barber (1734–1805)—a useful bowler—set up tents at matches offering the ladies as much ease 'as if they were in their own dressing room' (Ashley-Cooper, 163).

Richard's son, John Nyren (1764–1837), in The Young Cricketer's Tutor and Cricketers of my Time (1833), provided vivid and evocative character sketches of the Hambledon players whose performances were later recorded in Arthur Haygarth's Scores and Biographies (1862–1925). John Small (1737–1826), shoemaker and gamekeeper, in 1775 three times avoided being bowled out when the ball passed between the two stumps without striking them; the bowler's frustration led to the introduction of the third stump. A more upright style of batting followed, to which Small adapted and for which he began to make and sell suitable bats. Against Surrey at Broadhalfpenny Down in 1775 he made 136 and he was a pioneer of the quick single. Noah Mann (1756–1789), who was also a shoemaker, travelled 20 miles from North Chapel to play, fielding extra longstop besides being a very hard hitter. He died after a day's shooting, when he fell asleep by the fireside and his clothes ignited.

Nyren has immortalized 'those anointed clod-stumpers' (Nyren, 96)—Tom Walker (1762–1831) and his brother Harry (1760–1805). Nicknamed ‘Old Everlasting’, for his lengthy stay at the wicket, Tom made several centuries at Lord's in the post-Hambledon era but half an hour of Harry's batting was worth an afternoon of Tom's.

James Aylward (1741–1827) made runs for Hambledon including the club's highest individual score, of 167 against England at Sevenoaks in 1777. In 1779 Sir Horatio Mann employed him as his bailiff and he played for Kent, later becoming (1784) an innkeeper at Bridge, near Canterbury. David Harris (1754–1803), potter, was Hambledon's finest bowler. Bringing the ball from under his arm by a twist, he achieved length, lift, and leg-spin. Many of his wickets were secured by catches, for which the bowlers got no credit on the score-sheet. In old age, troubled by gout, Harris would rest on an armchair between deliveries. He linked 'man to man in bonds of fellowship by good works' (Nyren, 106), as did John Wells (1759–1835), a baker, who possessed those 'qualities which render man useful to society as well as happy in himself' (ibid., 101). In a rare match in which the fledgeling MCC combined with the failing Hambledon, he made 63 against England at Lord's in 1792. His brother-in-law, William Beldham (1766–1862), a yeoman and later a victualler at Tilford, near Farnham, was the only Hambledon player to be photographed. Nyren called him 'the best batter of his own or, perhaps, of any age' (ibid., 105), and he earned the nickname Silver Billy. His 94 for Hambledon at Lord's in 1789 and 144 for MCC there three years later symbolized the changing loyalties, as did the roles of the ninth earl of Winchilsea (1752–1826) as president of Hambledon and as a founder member of MCC. A man of considerable energy, blessed with good health throughout his life, Beldham was twice married.

There were other luminaries among the sixty or so players who represented Hambledon. Tom Sueter (1750–1827) was a wicket-keeper and one of the first batsmen to come out to meet the ball. Like many of his colleagues he had a fine singing voice, and a stone in the tower of Hambledon church records his work as a surveyor, while his great-grandson became both an admiral and a member of parliament. George Leer (1749–1812), carpenter, sang counter-tenor to Sueter's tenor and, in a short career, was famed as a longstop before becoming a brewer. Both he and Sueter were tested by the fast bowling of Thomas Brett (1747–1809), builder, and William Hogsflesh (1744–1818). In the 1780s Edward Stevens (1735–1819) played for Hambledon as a ‘given man’. He was invariably referred to as Lumpy, used as a surname and possibly derived from his having eaten a whole apple pie at a Hambledon dinner. He played with Hambledon in their first match on their new ground on Windmill Down in 1782. Lumpy may have been 'a bit of a smuggler' (Haygarth, 99) in his young days.

With the departure of Richard Nyren in 1791, 'the head and right arm were gone' (Nyren, 64), as his son remembered, but the signs of decline had already become evident some years earlier. The club minutes noted a drop in the attendance of members and an increase in unpaid subscriptions. War with France made its claims on service members, the subscription lists for 1793 showing that three of them had gone to sea. More significant, however, was the burgeoning growth of London. Hambledon's members found it more convenient and more fashionable to belong to the White Conduit cricket club and its successor, the new club at Marylebone which Thomas Lord had been managing since 1787. At the same time, Hambledon's players—cricket's first professionals—were making their own way to London, taking lodgings, and seeking new patrons to recompense them for their skills. The last club minutes were in 1796, as was the last match at Windmill Down, and henceforth there would be no more 'high feasting … with Little Hambledon pitted against all England' (ibid., 79).

Although the French wars and the rise of the MCC diminished the status of Hambledon, the club did survive the end to its activities in 1796. Account books resumed in 1808 and 'have all the marks of being part of a series, not the first record of a new or refounded club' (Underdown, 184). After 1812 Hambledon were playing with some frequency and there still existed a membership of gentry. 1825 has some claims to be seen as an alternative date for the demise of this eighteenth-century club.