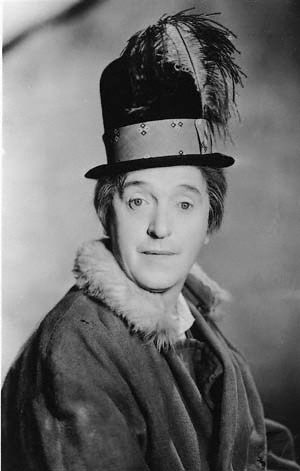 Laurel, Stan [real name Arthur Stanley Jefferson] (1890–1965), comedian, was born at his grandfather's house in Argyll Street, Ulverston, Lancashire, on 16 June 1890, the second son in the family of four sons and one daughter of Arthur Jefferson, known as A. J., of Bishop Auckland, theatre manager, and his wife, Margaret (Madge) Metcalfe, actress, of Ulverston. He attended schools in Bishop Auckland, Gainford, and Glasgow, after which his family connections helped him to gain entry to the music-hall as a ‘boy’ comedian. His first appearance was in 1906 at the Scotia Music-Hall, Glasgow, which his father managed. In 1907 he joined the Fred Karno company, where his greatest success was as Jimmy the Fearless in a sketch of that name. It was while touring the United States with Karno in 1912 that he tried his luck in American vaudeville, often in a duo with his common-law wife, Mae Dahlberg, who suggested his stage name, Stan Laurel, although he did not adopt it legally until 1934. In 1915 he saw the opportunities for music-hall pantomimists in the silent movies, and sought a mixed fortune in films and on the stage. He lived in the USA from this period.

Laurel became acquainted with Oliver ‘Babe’ Hardy in the early 1920s, but it was in 1927, under the auspices of the Hal Roach studio, that they were first paired with any success, in Slipping Wives. From that point they were to make over a hundred films together, some thirty of them silent, and almost all of them produced by Roach. Their best work was probably between 1929 and 1935, when they were engaged in creating coherent and sparse twenty-minute cameos. The Music Box (1932), involving the delivery of a piano to a house at the top of a steep incline, is usually regarded as their finest short film; it is certainly the most famous. Among their feature films, Sons of the Desert (1933), involving a Chicago convention and a mythical voyage to Honolulu, Way out West (1936), featuring the duet 'On the Trail of the Lonesome Pine', Block-Heads (1938), and The Flying Deuces (1939), with the pair joining the foreign legion, are among the best remembered. The Laurel and Hardy set piece was the ordinary situation from which sprang a spiral of disaster. Their usual guise was as everyday American hen-pecked husbands or companions, but over the years they did adopt other roles such as First World War soldiers or pilots. Whatever the location, they were soon engulfed in difficulties. Nervy, flustered, even tearful, Stan Laurel, 'the thin one', exacerbated these accumulating troubles, to the growing chagrin of 'the fat one', the ever earnest Oliver Hardy, culminating in his cry of 'Another nice mess you've gotten me into'. Laurel, in effect, made two contributions to the partnership: as Hardy was quick to concede, Laurel was the creator and rigorous controller of their comedy, as well as a member of what was widely recognized as the best comic double act of its time. An important reason for this was their eschewal of the conventional ‘straight’ man, two-dimensional and irritable. Each developed a detailed and complete persona of his own. The endearing bathos and crassness of Laurel found an admirable foil in the elephantine smugness of his rotund partner. Their last film, Atoll K, was made in 1952. Laurel and Hardy travelled extensively during the Second World War, entertaining troops, and made a variety tour of Britain in 1947, opening at the London Palladium. Oliver Hardy died in 1957, ending one of the most successful comic partnerships in history.

Stan Laurel won a special Academy award in 1960 for 'creative pioneering' on film. Much more serious and committed than his genial partner, he had devoted much time and energy to his peculiar art form. His devotion to his work might account for the chaos of his private relationships: his marital toils were convoluted and confusingly reported. The nearest to an exact listing would be to record that he was married to Lois Neilson in 1926 (with whom he had a son who died in infancy and a daughter); to (Virginia) Ruth Rogers in 1935 (after a possibly illegal ceremony in Mexico the previous year); to Illeana Shuvalova in 1938; to Ruth Rogers again in 1941; and to Ida Kitaeva Raphael, who survived him, in 1946. Stan Laurel died on 23 February 1965 in Santa Monica, California, USA, and was buried at Forest Lawn, Los Angeles.