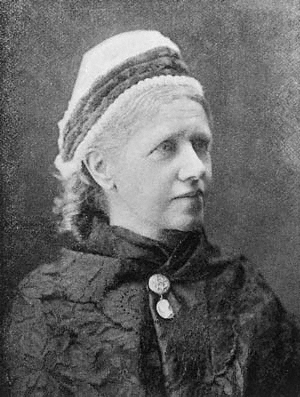 Smith, Sarah [pseud. Hesba Stretton] (1832–1911), novelist and short-story writer, was born on 27 July 1832 at New Street, Wellington, Shropshire. She was the third daughter of the eight children (three sons died young; four daughters and one son lived to maturity) of Benjamin Smith (1793–1878), printer, bookseller, and the first postmaster of Wellington, and Anne Bakewell Smith (1798–1842), a strict and notably intelligent Methodist. Sarah and her elder sister Elizabeth attended the Old Hall, a girls' day school in Wellington, but gained most of their education from the books in their father's shop. Both qualified as governesses.

At twenty-six Sarah Smith began her career as a journalist, using the pseudonym Hesba Stretton (derived from the initials of the siblings' names—Hannah, Elizabeth, Sarah, Benjamin, Anna—and the Shropshire village of All Stretton where her younger sister was bequeathed property). Without her knowledge Elizabeth sent Sarah's first published story to Charles Dickens, editor of Household Words. 'The Lucky Leg', a bizarre tale of a widower who proposes to women with wooden legs, appeared in no. 469 (19 March 1859). Stretton contributed by invitation 'The Ghost in the Clock Room' to the first All the Year Round Christmas number in 1859 and was successful again in 1864, 1865, and 1866. Although he did not accept all her submissions, Dickens was unfailingly helpful and encouraging. 'The Postmaster's Daughter' (All the Year Round, 5 Nov 1859), 'A Provincial Post Office' (All the Year Round, 28 Feb 1863), and 'The Travelling Post-Office' (All the Year Round, Mugby Junction, Dec 1866) reflect many personal and family experiences. Smith published stories, from the authentic and factual to the sensational and romantic, in Chambers's Journal, the Welcome Guest, Temple Bar, Tinsley's Magazine, and The Argosy. Her log books, a journal of continental travels, frequent moves in Manchester and London, and dealings with publishers from 1859 to 1871–2, show her to be tart and censorious, prickly in negotiations about payment, fully aware of her own worth, impatient with servants, and driven by the detection of ‘bugs’ from one lodging-house to another.

In September 1863 Sarah and Elizabeth Smith left home for Manchester, where Elizabeth worked as a governess (until 1870) and Sarah continued to publish a steady stream of children's books: Fern's Hollow (1864), Enoch Roden's Training (1865), and The Children of Cloverley (1865). The huge success that virtually launched her long career with the Religious Tract Society was Jessica's First Prayer (Sunday at Home, July 1866), a novel for children and the newly literate, about a London waif neglected by her drunken actress mother. With simplicity and pathos, traits Lord Shaftesbury praised in the story, Jessica exposes the prejudice of the Methodist congregation which initially shuns her and the miserliness of the coffee-stall keeper who eventually adopts her. It sold over two million copies in Stretton's lifetime, spawned the sequel Jessica's Mother (1867), was translated into fifteen European and Asiatic languages and published in Braille, depicted on coloured slides for magic lantern segments of Bands of Hope programmes, and placed in all Russian schools by order of Tsar Alexander II, a decree revoked by his successor.

First-hand observation made Smith's pictures of slum poverty accurate and compelling. Little Meg's Children (1868) features a ten-year-old dealing with abandonment, destitution, the deaths of her mother and an infant sibling, and teenage prostitution; thanks to Meg's biblical faith and some narrative twists, the story also presents reconciliation and reformation. From the outset Smith underscored the candid, often tragic truthfulness of the child, usually a waif, like the urchin Tony in Alone in London (1869), who tries to have the dying child Dolly admitted to an overcrowded hospital, the heroic Tom Haslam in Pilgrim Street (1867), who dies rescuing his abusive convict father, trapped in the fire the reprobate himself had set, and the lad Peter in The Fishers of Derby Haven (1866), who merits only flogging for his honesty. In addition to illustrating New Testament principles, Smith's stories turn on coincidences, frequently involving money, such as Meg's finding treasure in a dingy attic, the delayed letter that results in the surprise gift of a freehold cottage in Two Secrets (1882), and the discovery of hoarded money through an act of charity in Sam Franklin's Savings Bank (1888).

In her three-decker adult novels Smith continued the detailed accuracy of locale and dialect and added, as in The Doctor's Dilemma (1872), the sentimental elements of conflicts between love and duty, undeclared and protracted romances, women's vulnerability under greedy husbands and guardians, and convenient deaths. Her fiction for the young was more succinct and focused, always hitting hard at social issues: enclosure (Fern's Hollow, 1864), young offenders (In Prison and Out, 1878), streetwalkers and rescue missions (The King's Servants, 1873), alcoholism and parental neglect (Nellie's Dark Days, 1870, Lost Gip, 1873, Brought Home, 1875), the abuse of domestics (Cassy, 1874), and the starving of children to make them effective beggars (The Lord's Purse-Bearers, 1883). Smith applauded Dr Barnardo's work with street children; with the Revd Benjamin Waugh, editor of the Sunday Magazine, she lobbied for the establishment of the Society for the Prevention of Cruelty to Children in 1884, and served on its executive for a decade, before resigning on account of the society's financial mismanagement. Smith collected money (over £900) and wrote books to support the cause of Russian evangelicals (Stundists) and famine victims in the early 1890s.

At the age of sixty in 1892, Sarah Smith settled with her sister Elizabeth in their first permanent residence, Ivycroft on Ham Common, Richmond, Surrey, where they founded a branch of the Popular Book Club to circulate good books among the working classes. Here the inseparable duo spent their last nineteen years. Elizabeth predeceased her sister by eight months. Sarah Smith died at home on 8 October 1911. The Sunday at Home obituary praised her 'long, happy, useful and noble life'.