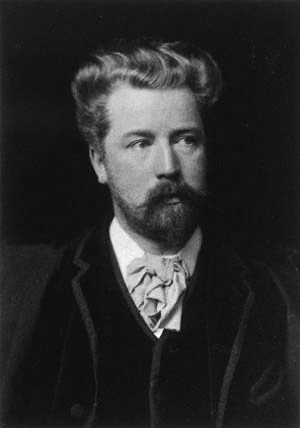 Sharp, William [pseud. Fiona MacLeod] (1855–1905), novelist and mystic, was born at Paisley on 12 September 1855, the eldest child of David Galbraith Sharp (d. 1876), textile manufacturer, and his wife, Katherine, daughter of William Brooks, Swedish vice-consul at Glasgow (her family was of Swedish descent). Sharp was from the beginning an unusual and distinctive child, sharing from an early age his father's love of the west highlands: in the early 1870s Sharp claimed to have 'sailed up every loch, fjord and inlet in the Western Highlands and Isles' (Alaya, 19). He was educated at Blair Lodge Academy, Polmont, and from 1867 at Glasgow Academy. Gifted at languages, in 1871 he entered Glasgow University, where he came under the influence of the charismatic professor of English, John Nichol. Sharp stayed at Glasgow for only two years, however, and in 1874 was apprenticed to a lawyer's office in the city, shortly after an interlude of three months' travelling with a troupe of Gypsies.

The death of his father in August 1876 precipitated a breakdown in Sharp's health, and he was sent to Australia to recuperate. This was to prove an imaginatively fruitful period. After his return from Australia, Sharp went to London in 1878 to work for the Melbourne Bank, but his irregular attendance helped to curtail his banking career, which ended in 1881. In the same year he gained an introduction to Dante Gabriel Rossetti from Sir Noël Paton, who had once been a pattern designer in the Sharp family firm in Paisley. Sharp was able to gain a temporary post at the Fine Art Society's gallery in Bond Street, but when this ended he was in difficulties. In 1882 he published three books, Dante Gabriel Rossetti: a Record and a Study, Pictorialism in Verse, and his first volume of poetry, The Human Inheritance. Though these attracted some notice, Sharp none the less remained in financial difficulties, and was saved from a fantasy of enlisting in the army by a combination of £40 from Harper's Magazine and a gift of £200 from a friend of his grandfather's, given on the recommendation of Sir Noël Paton (this latter enabled him to visit Italy for five months). The quality of Sharp's character was also important to his eventual success: his pluck, presence, and sense of address, combined with his blonde hair and (later) beard and height of more than 6 feet, won him an entrance at many editorial offices.

By 1883 Sharp had been appointed London art critic of the Glasgow Herald, and his rise into the literary coterie of London continued: in these years he made the acquaintance of Swinburne, Morris, Pater, Browning, Meredith, William Bell Scott, Ford Madox Brown, and Holman Hunt. A decade of rewarding literary hack work began. By 1885 Sharp was employed by Eric Robertson of the Great Writers series to work on biographies of Shelley, Heine, and Browning. Sharp was also a contributor to Ernest Rhys's Camelot Classics, the art critic for the Art Journal as well as the Herald, and an editor in the Canterbury Poets series (he edited about a dozen volumes in this and the Camelot series). Under the burdens of such success he began to suffer from the strain inherent in suppressing his visionary, fantastic self. In the 1890s, as the direction of his life changed, Sharp passed on some of his critical work to his wife.

After a nine-year relationship Sharp married his first cousin, Elizabeth Amelia Sharp (1856–1932), in 1884. They had no children. A writer herself, Elizabeth Sharp published books on art and music history, translated Heine, and was the editor of Women Poets of the Victorian Era (1890). She was the daughter of Sharp's father's elder brother Thomas, and Agnes Farquharson, daughter of Robert Farquharson, sometime provost of Paisley. Husband and wife collaborated to some extent, most notably on Lyra Celtica (1896). Sharp continued to suffer from ill health, although ill health had a tendency to stimulate his imagination: while bedridden in 1886 he had a 'psychic experience'. Always a sufferer from nerves in public, in 1889 he withdrew his application for a chair in literature at University College, London, on medical advice.

In 1890 Sharp took a trip through Europe and developed or completed a feeling of deep dislike towards city living. He had visited Italy before, but it was his experience on this visit which deeply changed his perception: it seems almost to have been a Forsterian awakening, and was undoubtedly connected with a woman whom he met in Italy, Mrs Edith Wingate Rinder, a Celticist and translator of Breton folk tales, who spent three weeks with the Sharps at Rome. Sharp seems to have become at least emotionally involved with her, and she appears to have been the wellspring for the emergence of Fiona MacLeod, who began to take form in his mind in 1891. Sharp stayed in Rome from December 1890 to March 1891, and after his stay produced a book of poetry, Sospiri di Roma, which was privately printed at Anzio in 1891. Its free verse and free themes marked a new departure for Sharp: in point of verse form, in fact, it was pioneering work, cited alongside Walt Whitman and W. E. Henley by Richard Burton in 1894. One of its most frequently anthologized pieces, 'The White Peacock', probably gave D. H. Lawrence the title for his first novel, and it is possible that Sharp's free verse was also an influence on Lawrence.

By the end of 1891 Sharp was back in London, but his personal as well as his literary mode had changed: the Sharps moved to Phenice Croft at Rudgwick in Sussex in 1892, and although they only used this cottage for two years, Sharp was never again regularly resident in London, resuming instead a wandering life which in the next four years took him to the USA (where in 1892 he met Walt Whitman), Paris (where he made the acquaintance of many of the décadents and symbolistes), Algeria, Tunisia, Iona, Edinburgh, and Venice. In 1892, he edited (and indeed entirely composed under a variety of pseudonyms) The Pagan Review, one of the chief texts of the ‘new paganism’ of the 1890s. Its cover bore the motto 'Sic transit gloria Grundi', and in it Sharp called for 'a new inwardness to withdraw from life the approved veils of convention'. Within a year, this 'new inwardness' had risen to the surface.

In The Pagan Review Sharp argued against discriminating between men and women, in language suggestive of the fraying of the boundaries of sex themselves. Sharp himself was shortly to attempt to prove the presence of a woman within by developing the persona of Fiona MacLeod, who in large part took over his imaginative life from 1893 on. Her surname may derive from Seamus Macleod, an old fisherman Sharp had known as a boy, while her first name was the feminized form of Fionn/Fingal/Finn, the ancient Gaelic ‘sleeping hero’ of whom it was reputed in some traditions that he would, like Arthur, wake again to save his people. The feminization of this figure was symbolically appropriate to the ‘Celtic twilight’ vision of the Gaeltacht which Sharp sought to create, where the highlands were the repository of an ancient but fading wisdom, both beautiful and supine, a vision he shared with Matthew Arnold, but which was vigorously rebutted by W. B. Yeats. Sharp's own view in Lyra Celtica that Yeats was too 'clear-sighted' to be Irish 'at the expense of being English in the high and best sense of the word' (p. 51), clearly indicates the gap between them. Sharp's first production as Fiona MacLeod was the novel Pharais, which appeared in 1894 and was dedicated to Edith Wingate Rinder. The production of the female persona of Fiona seems to have caused Sharp frequent ill health, culminating in a near total breakdown in 1897–8; moreover, he had a feeling of being haunted by past lives. The Jungian doctrines of archetype and the collective unconscious suggest themselves in examining Sharp's imagination, particularly the powerful anima of Fiona which emerged in his consciousness in the 1890s, peaking in 1894–6, and which he projected onto the scenes and interests of his childhood. His wife developed an understanding of Sharp's creative duality, which she defended elaborately in her 1910 biography of the poet: her pet name for him was Wilfion.

Fiona MacLeod's début was succeeded by a spate of activity. In the autumn of 1894 Sharp went to Edinburgh, where he collapsed after delivering the first of a series of lectures at the university but none the less made his influence felt. Together with Patrick Geddes he headed the Evergreen circle which was, among other things, concerned with developing a distinctive and renewed Scottish Celticism in the context of recapturing Edinburgh's status as a metropolis of European stature. Two Fiona MacLeod novels, The Mountain Lovers and The Sin Eater, appeared in 1895, the latter being published by Patrick Geddes and Colleagues, a firm established to publish literature in support of the Celtic revival; Sharp was its literary adviser. In 1896 Sharp further contributed to this renewal by publishing an edition of Macpherson's Ossian, and on a visit to Ireland in 1897 met George Russell, Lady Gregory, Standish O'Grady, Edward Martin, and Douglas Hyde. By this stage Yeats, initially hostile but afterwards friendly, was becoming irritated by the Scottish writer's verbiage and vagueness; in Autobiographies he commented that Sharp 'never told one anything that was true; the facts of life disturbed him and were forgotten' (p. 341). Perhaps, as hinted in a letter of Sharp's of 30 April 1898, Yeats also guessed at the Fiona Macleod deception. The fact that Fiona Macleod declined to lend her name to the political side of the Celtic movement was also irritating to the Irish writers.

Sharp continued to write productively under his own name; he needed the money, for his wife was unable to earn anything from her art criticism while on their frequent travels. In 1898 Sharp suffered a total nervous collapse, and thenceforward made frequent visits to the Mediterranean to recuperate. The struggle of the 1880s which had imposed the literary opportunist on the passive visionary was now succeeded by a mental struggle to maintain both the Sharp and MacLeod identities. Sharp constructed an elaborate series of deceptions, implicit and explicit, to maintain his secret: he even contributed a fictional entry for Fiona MacLeod to Who's Who. On 28 January 1899 an unsigned article in the Daily Chronicle suggested that Sharp and MacLeod were one and the same. Sharp wrote a disclaimer, but a further embarrassment arose in 1902, when he had to decline being put forward for a civil-list pension on the basis of Fiona MacLeod's work. Fortunately for Sharp the prime minister, Arthur Balfour, accepted a verbal assurance from Sharp, which obviated the need for the identity of Fiona to be made public.

Sharp's health continued to fail, and he died in Alcantara, Sicily, at Castle Maniace, the home of his friend the duke of Bronte, on 12 December 1905. His wife survived him. He left a letter to his friends disclosing his identity as Fiona Macleod. Sharp was buried in a woodland cemetery on the hillside at Alcantara two days later. 'An Iona cross, carved in lava' (Sharp, 419), was set above the grave with an inscription of the writer's own choosing.

Sharp wrote or edited almost forty books in his own name, as well as more than ten as Fiona MacLeod. As Sharp his work is all but forgotten, though the free verse is of recognized 'literary-historical importance' (Fletcher, 485). As Fiona MacLeod he created an especially intense vision of a doomed and marginal Celticism, which not only has an appeal by virtue of its distinctive prose and visionary emotionalism, but also through its influence on the twentieth-century Scottish novel, notably the work of Neil Gunn.