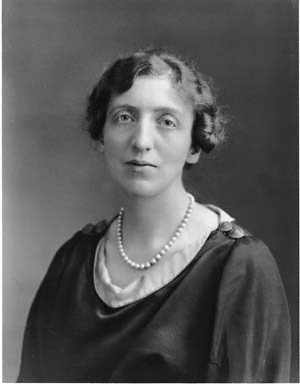 Denman [née Pearson], Gertrude Mary, Lady Denman (1884–1954), public servant, was born on 7 November 1884 at 4 Durham Villas, London, the second of the four children and only daughter of Weetman Dickinson Pearson (1856–1927), contractor, Liberal MP, and afterwards first Viscount Cowdray, and his wife, Annie Cass (1862–1932), charitable worker and political hostess. Between attending day school in Queen's Gate, London (1894?–1897), and finishing school in Dresden in 1901, she supplemented the educational attentions of governesses by wide reading, especially of books on economics and philosophy in her father's library. Her father's business ventures frequently took her parents abroad, and her somewhat isolated childhood fostered both an independence of mind and a shyness which she nearly always overcame by sheer hard work, enthusiasm, and concentration. Slim and boyish in appearance, Trudie, as she was known, was described as characterful rather than pretty, a broken nose sustained in childhood depriving her of claims to great beauty.

On 26 November 1903 she married Thomas Denman, third Baron Denman (1874–1954), army officer and Liberal peer. A son and daughter were born in 1905 and 1907, and in 1911 she accompanied her husband to Australia on his appointment as governor-general. The marriage was not a success, and although remaining on friendly terms they lived largely separate lives after their return to England in 1914.

Born to great wealth, Lady Denman believed that the only justification for such an inheritance was service to the community. A brief period as a member of the executive committee of the Women's Liberal Federation (1908–10) gave her an invaluable introduction to the machinery and business of a large organization, and throughout her life she was involved not only in family concerns—as a director of the Westminster Press Ltd and the Cowdray Trust, and a board member of S. Pearson & Son Ltd—but also in numerous philanthropic activities—as chair of the Smokes for Wounded Soldiers and Sailors Society (1916–17) and the Cowdray Club for Nurses and Professional Women (1937–52), as an executive committee member of the Land Settlement Association (1934–9), and as a trustee of the Carnegie United Kingdom Trust (1938–48). An enthusiastic games player, she particularly enjoyed tennis and golf, and was president of the Ladies' Golf Union from 1932 to 1938.

In October 1916 Lady Denman became chairman of the subcommittee of the Agricultural Organization Society which, on the suggestion of Margaret Rose Watt, had undertaken to found Women's Institutes. On 4 October 1917 the 137 institutes transferred to the Board of Agriculture and Fisheries and she became honorary assistant director of the women's branch of the food production department, responsible for the newly created Women's Institute section. She insisted that the institutes must be self-governing and on the formation on 16 October of the National Federation of Women's Institutes she was elected chairman, a post to which she was re-elected annually until she retired in 1946, wishing to make way for someone younger. She saw in the Women's Institute movement a great opportunity for social reform; a means for democratic training in citizenship for countrywomen, for widening their knowledge, and for improving their standards of life. The remarkable achievements of the movement are the fruit of her talent for administration, her foresight, and the principles of good procedure and democracy on which she based its early organization. When she died there were over 8000 institutes with a membership of 450,000. The Women's Institute Residential College, founded in September 1948 at Marcham, near Abingdon, Berkshire, was called Denman College in recognition of her services.

In 1930 Lady Denman helped to found and became chairman of the National Birth Control (later Family Planning) Association, an office which she held until her death. Having witnessed in Australia the suffering caused to women by too-frequent childbirth, she was convinced they should be given the means to plan their families so as to avoid poverty and ill health. Her unstinting support for this controversial cause needed considerable courage and forthrightness, and she considered it to be the most difficult job she had ever undertaken.

As head of the women's branch of the Ministry of Agriculture from April 1938 Lady Denman co-ordinated the re-establishment of the Women's Land Army, becoming its honorary director in 1939, and lending her home, Balcombe Place in Sussex, as its administrative headquarters. She brought to the task initiative and good sense, always seeing the work of the land army in relation to the needs of the nation at war, yet she realized that there were many obstacles to be overcome and her powers of leadership were greatly needed to reconcile conflicting demands. She waged constant battles for proper recognition of the land army, and succeeded in securing conditions of employment which were of lasting benefit to agricultural workers as a whole. However, the government ultimately refused to award the land army the grants, gratuities, and benefits which it accorded to women in the civil defence and armed services, and she resigned in protest on 15 February 1945.

As a chairman Lady Denman excelled, her contemporaries praising her genius for organization and the impartiality, quick understanding, and sense of humour which enabled her to handle with success any meeting, however large or difficult. She could be formidable in opposition—which she enjoyed—but was fair and generous to those whose opinions differed from hers. Underlying the administrative drive, the penetrating eye in committee, the often gloriously caustic comment, and the intolerance of dishonesty, pomposity, and pretension, there was deep affection for those whose cause she championed, for succeeding generations of her own family, and for her many friends whom she welcomed to Balcombe Place.

In 1920 Lady Denman was appointed CBE, in 1933 DBE, and in 1951 GBE. Taken ill with appendicitis while on holiday in France in February 1936, mismanagement of her condition by local doctors nearly cost her her life. In early 1954 a period of ill health was traced to the displacement of an organ, a legacy of 1936, and although she survived the major operation this necessitated, her heart subsequently failed and she died at 20 Devonshire Place, London, on 2 June 1954. A memorial service was held in Balcombe parish church, although as the bishop of Chichester pointed out in his address, she personally eschewed dogma, refusing to call herself a member of the church. Her body was cremated and the ashes scattered at Balcombe Place.