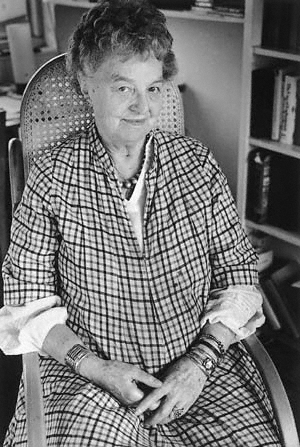 Goff, Helen Lyndon [pseuds. P. L. Travers, Pamela Lyndon Travers] (1899–1996), children's writer, was born on 9 August 1899 in Maryborough, Queensland, Australia. She was the first of the three children of Travers Robert Goff (1863–1907), a London-born bank manager (later demoted to a clerk), and Margaret Morehead (d. 1928), the granddaughter of Robert Archibald Morehead, who moved to Australia in 1841 as manager of the Scottish Australian Company and whose considerable holdings included Bowen Downs, the largest pastoral station in Australia.

After her father's death Helen moved with her mother and two younger sisters to live with her great-aunt, Christina Saraset, in Bowral, south of Sydney in the southern highlands of New South Wales. She attended a local grammar school until the age of ten, then was sent to Normanhurst boarding-school in Sydney. As a child she wrote poetry and newspaper-style articles, and during her adolescent years began publishing articles and poems for a variety of Australian magazines and newspapers, including The Bulletin and The Triad; for two years she also wrote a human interest column for a daily Sydney newspaper. Upon completing school, she worked in the cashier's office of the Australian Gas and Light Company and then had a brief stint in the theatre, acting and dancing with the Alan Wilkie Shakespearian Touring Company. In 1924 she left for London, where from 1924 to 1928 she published poems in the Irish Statesman under the encouragement of its editor, George Russell (A. E.). In the mid-1920s she travelled to Fontainebleau, near Paris, where she became a disciple of Russian occultist George Ivanovich Gurdjieff, and to Switzerland to pursue the teachings of psychologist Carl Gustav Jung. In the 1930s she lived in London and at Pound Cottage, Mayfield, near Tunbridge Wells, working as a drama critic for the New English Weekly and publishing poetry and travel essays, including her book Moscow Excursion (1934). During this time she became close friends with George Russell and also met the poet William Butler Yeats.

Goff took as her pseudonym the name Pamela Lyndon Travers, usually in the form P. L. Travers. Her first literary success came in 1934, when she published Mary Poppins. Translated into over twenty languages, the book became an instant classic of modern children's literature, while Mary Poppins became 'the world's best-known nanny' (Hunt, 214). The book's popularity and the continued success of its sequels can be attributed to Goff's quirky view of the world and her deft incorporation of the elements of myth, fairy tale, and mysticism into everyday life. Mary Poppins Comes Back was published in 1935, and was followed by Mary Poppins Opens the Door (1944), Mary Poppins in the Park (1952), Mary Poppins from A to Z (1963), Mary Poppins in the Kitchen (1975), Mary Poppins in Cherry Tree Lane (1982), and Mary Poppins and the House Next Door (1989). While the series has been considered children's literature since its inception, Goff disliked this label, arguing that the distinctions between literature for children and adults were blurred at best. Whenever asked about the inspiration for the character of Mary Poppins, she commented: 'I never for one moment believed that I invented her. Perhaps she invented me' (Bergsten, 71).

Despite her literary success, Goff was intensely private about her personal life, and once said that she most identified with Anonymous as a writer. She often voiced her doubts 'that biographies are of any use at all' (Cott, 227), and she granted an interview to the scholar Patricia Demers in 1988 on condition that enquiry into her personal life was forbidden. Throughout her life she remained resolute in her belief about the pointlessness of biographical data and explanations in the quest for literary meaning. Although she never married, during the war years Goff adopted a son, the Dublin-born John Camillus Hone (b. 1939), son of Nathaniel and Biddy Hone and a descendant of the eighteenth-century painter Nathaniel Hone.

In 1940 Goff left for the United States and lived there until 1945 as a wartime evacuee. During this time she published I Go by Sea, I Go by Land (1941), which focused on two children's experiences while being evacuated to America during the Second World War, along with a series of privately circulated new year's gift books, including Aunt Sass (1941), Ah Wong (1943), and Johnny Delaney (1944). She also travelled west on the invitation of her friend John Collier, an administrator for Indian affairs, and stayed on a number of Navaho, Hopi, and Pueblo reservations. Before leaving she was rewarded with a secret Pueblo name, something which honoured her tremendously because of her feeling 'that names are a part of a person, a very private thing to each one' (Burness and Griswold, 227).

In 1945 Goff returned to England and for the next twenty years continued to publish novels, essays, and lectures. The Fox at the Manger, a Christmas story, appeared in 1962. In 1964 Mary Poppins was made into a Walt Disney film starring Julie Andrews and Dick Van Dyke. While the film lacked the depth and the mythological elements of the book—despite her involvement with the production, Goff was not pleased with the end result—it was a tremendous commercial success, and became a catalyst for renewed critical interest in her work. Modern commentary on the Mary Poppins series has been uneven: while John Rowe Townsend praised its paradoxical humour, he also voiced concerns about the series' propagating illusions about English domestic life. In contrast, Jane Yolen praised Goff for her creation of strong mythical worlds for young readers. In the 1970s several critics became alarmed at apparent elements of racism, sexism, and classism in the 'Bad Tuesday' chapter of Mary Poppins. While Goff staunchly maintained that she intended no offence to anyone, in 1981 she revised the chapter, exchanging non-gendered, raceless, and classless animals for the original human characters.

From 1965 to 1977 Goff again lived in the United States, working as writer-in-residence at both Radcliffe College in Cambridge, Massachusetts (1965–6), and Smith College in Northampton, Massachusetts (1966), and as Clark lecturer at Scripps College in Claremont, California (1970). For the next two decades she continued to publish essays and novels, including Friend Monkey (1971), a three-part novel based on the Indian monkey god Hanuman, About the Sleeping Beauty (1975), and Two Pairs of Shoes (1980). In 1977 she was appointed OBE for her contribution to literature, and in 1978 she received an honorary doctorate of humane letters from Chatham College in Pittsburgh, Pennsylvania.

From 1976 until her death Goff was contributing editor to the American journal Parabola: the Magazine of Myth and Tradition, something which perhaps reflected her own quest for meaning. This quest also appeared in her pursuit of a number of spiritual movements throughout her life, ranging from Christianity through Zen Buddhism to Sufism, a branch of Islamic mysticism. Myth and fairy tale recur throughout her later works, and she was particularly aware of the importance of these elements in her life. However, the theme that permeated all her work and, by extension, her life was connectedness, and she borrowed E. M. Forster's phrase 'only connect' to describe her views of the world and her place in it. An essay by this title appears as the concluding piece in her What the Bee Knows: Reflections on Myth, Symbol and Story (1989), a collection of articles originally written for Parabola and her last published book. The phrase is a fitting epitaph. She died at her home, 29 Shawfield Street, Chelsea, London, on 23 April 1996, St George's day; the funeral was held at Christ Church, Chelsea, on 1 May, May day. With her interest in myth and meaning, the two days are curiously significant. At her request, the final place for her ashes is unknown: she did not want it to become a shrine for Mary Poppins admirers.