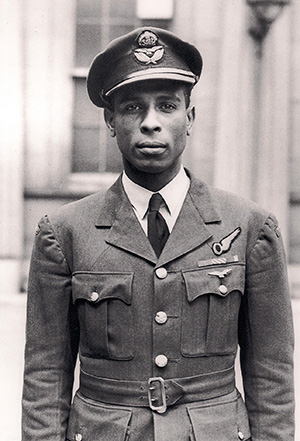 Cross, (Philip Louis) Ulric (1917–2013), air force officer, judge, and diplomatist, was born on 1 May 1917 in Port of Spain, Trinidad, the son of Reginald Rufus Cross, headteacher, and his wife, Maud. One of nine children, at the age of eleven he qualified for a free secondary education scholarship and attended St Mary's College, Trinidad. At the age of fourteen he wrote his name as 'Flight Lieutenant Cross DFC' in the flyleaves of two of his school books: Kennedy's Latin Primer and Shakespeare's As You Like It. In 1990 he explained in the BBC television programme Hear-Say: 'To me that was the height of anybody's ambition, to be a Flight Lieutenant in the Royal Air Force and to get the DFC. Most of my friends thought I was mad!' (Hear-Say, 7 Aug 1990). On leaving school he joined the Trinidad Guardian, where he worked as a copy-editor.

Cross was working as a civil servant when he decided to volunteer for the RAF. Later he explained that he enlisted because he was 'young, adventurous and idealistic'. He said his recruitment enabled him to escape his homeland, where he hated 'the frustrations and the stultifying nature of colonial society'. He also said that, in addition to defeating Hitler, for him 'the whole idea of being a member of the RAF was romantic' (Hear-Say, 7 Aug 1990). Until 1941 many black colonials from west Africa and the Caribbean who volunteered for the RAF were rejected, but after the battle of Britain in 1940 the RAF realized they had to move with the times. In 1941, with 250 other Trinidadians, Cross was accepted into the RAF and journeyed to Britain. Of that group, fifty-two were killed in action.

Cross started his training at RAF Cranwell, near Sleaford, Lincolnshire. During his training he learned wireless operation, meteorology, bomb aiming, navigation, and Morse code. After qualifying as a pilot officer he was assigned to Bomber Command and served as a navigator in 139 squadron. He was the only West Indian in the squadron, but he recalled that it was very cosmopolitan and included Polish, Indian, English, Welsh, Scottish, Scandinavian, and Dutch aircrew. When the RAF realized that 80 per cent of their bombs were missing their targets, they established a Pathfinder force to drop flares to guide the bombers. Cross joined them and in 1999 he recalled:

I did eighty operational flights over Germany, including twenty-one to Berlin … when the flak starts coming at you and you are ‘coned’ in a searchlight you feel fear. But your job is to get to the target on time and that is what you are preoccupied with.

He was almost killed when enemy flak destroyed one of his plane's two engines, and the plane crash-landed. He said: 'We flew home over the whole of Germany on one engine at just 7,000 feet at a reduced speed'.

In 1943 Cross made an appearance in the short information film West Indies Calling with the Jamaican broadcaster Una Marson and Trinidadian welfare officer Learie Constantine. This was produced by the Ministry of Information to show how West Indians in Britain were involved in the war effort. In 1944 the London-based League of Coloured Peoples noted in one of its newsletters that the recent awards to Cross of the Distinguished Flying Cross in June 1944 and the Distinguished Service Order in November 1944 were 'a joy to every West Indian heart' (Newsletter, 63, Dec 1944). The league also informed its readers that Cross had been appointed the first liaison officer for West Indians in the RAF.

After the war Cross studied law and was called to the bar by the Middle Temple in 1949. He later became a talks producer with BBC radio from 1953 to 1957. After Ghana became independent in 1957 he went there to work in the attorney-general's office (1958–60) and then to West Cameroon (1960–66) as senior crown counsel and attorney-general. In 1967 he became a high court judge in Tanzania, a post he then took up in Trinidad in 1971. He served as high commissioner for Trinidad and Tobago in the UK from 1990 to 1993. With Joan Woodford he had a daughter, Susan (b. 1945), later Lady Hollick, a television producer and executive and charity organizer. He also had a son, Richard Finch, later an educator. On 11 April 1949 he married Jasmine Angela Thomas (b. 1924), daughter of Albert Edward Thomas, medical officer of health, and former wife of Philip Martin Thomas. The marriage was dissolved and on 2 October 1959 he married Ann Carol Whittingham (b. 1932), daughter of Robert Buxton Whittingham, hotelier, with whom he had a daughter, Nicola (born in Tanzania).

In addition to Hear-Say, Cross was interviewed about his RAF service for BBC2's Windrush (1998), BBC Radio 2's The Forgotten Volunteers (2000), and Steven Hatton's acclaimed film Into the Wind (2009). In 2011 he received the order of the republic of Trinidad and Tobago, the nation's highest award. He died on 4 October 2013 at his home in Port of Spain, Trinidad, where, in retirement, he had been living with his daughter Nicola. He was survived by all three children.

Reflecting on his experiences of wartime Britain in 1998, Cross said:

the strange thing is that when you're really young you feel immortal. That may well be a defence mechanism, but you do feel immortal, and you knew that obviously the possibility existed, that every time you got up in an aeroplane and flew over Germany you wouldn't come back. But the young feel they will live forever … And I felt I was doing the right thing in trying to stop Hitler … you're young, this was a tremendous adventure, and you were doing it for the right reasons.